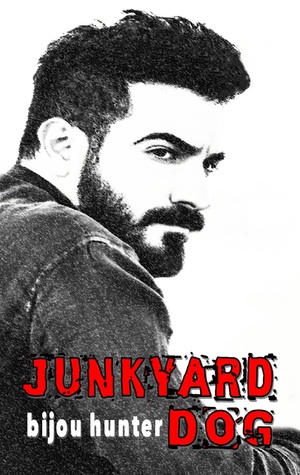 Angus Hayes is as mean as a junkyard dog. Well, that’s the rumor Candy Wilburn hears before taking the job as his assistant. Hayes doesn’t disappoint. He’s a giant man with a big mouth and a bigger ego. In the town of White Horse, what the gorgeous and dangerous Hayes wants, he gets. Now he wants his sassy assistant.

Candy has no doubt Hayes will make a great lover, but she doesn’t want to be her boss’s booty call. At first anyway. Once he shifts from boss to friend and lover, Candy falls hard. Now she can only hope the filthy-mouthed outsider she loves will open his heart and learn to trust.

Junkyard Dog is a standalone romance with adult language, violence, and sexual situations. 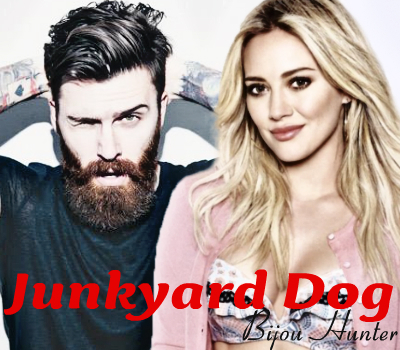 “Prepare myself?” I ask, laughing. “Do you mean with yoga or stretching techniques to prepare for your massive… What’s a classy word for penis? Ooh, I know, I’ll call it a super, big humdinger.”

Bijou Hunter delivered a fast-paced enjoyable read with two of the most entertaining characters I’ve read in a while. ‘Junkyard Dog’ was my first read by this author, but it won’t be my last. Low in angst and drama, this gem tells the story of Candy, a single mother who recently moved in town with her two young twins. Needless to say she needs a job. When she finds out the asshole who rules the small town, Angus Hayes needs an assistance she’s all in. Candy can deal with any kind of asshole, because unfortunately Hayes is not the first she met.

“So are you married? Dating anyone serious? Have a few baby mamas around town?”
“I don’t believe women are my equals so I will never be in a serious relationship with one of them.”

Hayes is an angry, mean bastard who treats everyone in a very despicable way. But Candy is not afraid of him. She gives as good as she gets, not batting an eye on his insults or his “eccentric” personality. Hayes is aware of the fact Candy is a beautiful woman, so he knows the men in town will circle her like sharks. It goes without saying he has to be the man for her, after all he runs the world town.

Candy is attracted to Hayes too, so she doesn’t try very hard to stay away from him, even if he is her boos. As much as she wants him, she can’t forget Hayes doesn’t exactly care about “her baggag”….I mean her children.

What an entertaining read this one turned out to be. ‘Junkyard Dog’ was so different from any boss-employee romance books I’ve read so far. Mainly because the two MC were…different, a little weird maybe and also smart-mouthed. The story is told from both MC’s perspective and I really enjoyed this aspect. I had a blast being in these two characters’ heads. The story line was nice enough, but personally I would have preferred something more – more drama or/and angst, action, excitement…something.

Both MC were vividly portrayed and so, so engaging. Our, hero, Hayes is a badass. A grouchy, pain in the a$$ man who most of time was an angry, intimidating, irritating prick. I’m not sure everyone will like this kind of hero and I have to admit it took me a while to warm up to him. Like I said he is a bada$$, but he isn’t a bad man. Sure, he is demanding and possessive, selfish and like I mentioned above irritating as f@ck, but he also is sweet, and caring.

“Sooner or later, this is happening,” he says, studying me. “You best prepare yourself.”
“Prepare myself?” I ask, laughing. “Do you mean with yoga or stretching techniques to prepare for your massive… What’s a classy word for penis? Ooh, I know, I’ll call it a super, big humdinger.”

Candy is Hayes’s female version. She is his perfect match in every damn way. I really liked her character. Such a sassy, fun and entertaining heroine. From the beginning she gives as good as she gets and I really enjoyed this fact. She’s strong, a great mother to her twins and she can handle everything and anyone. In other words she is a bada$$ as well. From the moment Candy meets Hayes she makes sure he understands she will never be his bimbo or his next doormat and she does it in such a witty way.

Hayes and Candy’s relationship was unusual to say the least. Don’t expect for them to be that silly foolish, over sentimental couple who fall instantly for each other and live happily ever after. No, no…Like I previously mentioned, they were entertaining and everything, but never too sweet. I absolutely loved the back and forth between them. I had so much fun reading their interactions.

“Be nice to me,” I tell the dick while my hand slides along its length. “I’m the sweet lady attached to the vagina you enjoy pounding.”

Overall, this was an enjoyable read, but I have to say there were some OTT scenes/moments that didn’t sit well with me. That being said, I recommend this one if you are looking for a different boss-employee romance novel with fun main and supporting characters and witty dialogue.