Cohen is a man apart on Bristol Island—an outcast loved by all but separated by his position within the community. Dylan is the newest resident in town, but she arrives with a dark secret and a desire to keep it buried.

But when burning attraction is thrown into the mix, his job and her secrets are quickly forgotten—that is until one impetuous decision renders a relationship off-limits, unethical, and utterly inappropriate.

Living next door to one another on the island’s isolated peninsula guarantees their paths will cross time and time again. With fate tempting Cohen to ignore his conscience and, for the first time in his life, gamble with the rules, will he risk everything for Dylan?

And what happens when Dylan’s past suddenly catches up to her? Will she find the strength to bare her soul to him? Or will she let her secrets take them both down?

Sometimes the inappropriate relationship is the most appropriate of them all. 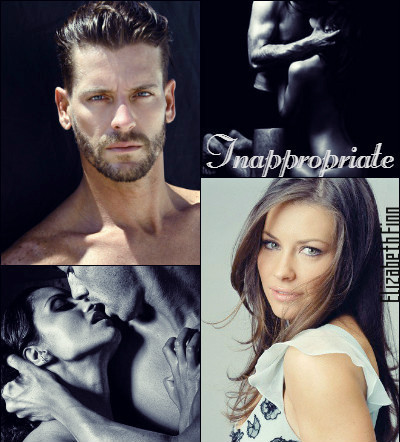 “It hurts to want something so much that you can’t have.”

When you pick a book from this author you know what to expect – angst, which it’s done very well every damn time and well written hot steamy sex scenes that I guarantee will leave you hot and bothered. Elizabeth Finn delivered here an enjoyable read, a raw, lovely romance, a story that will make you feel. “Inappropriate” is the second installment in “Bristol Island” series and it can be read as a standalone.

“Our past only has the power we give it…”

“This is Bristol Island. This is my world. And this is all I have. My life is here, my career.”

Cohen Jessup is the only doctor on Bristol Island. Cohen is attracted with Dylan, who’s his new neighbor from the moment he met her. She’s sweet and funny and he would love taking her out, but everything changes when Dylan shows up a few days later for an appointment at the clinic where Cohen works. Getting involved with a patient is totally inappropriate, so there’s only two options for them – forget about the feelings they have for each other and stay friends or forget about this inappropriate aspect of their relationship and take a risk and give in to temptation.

“Have you ever made a quick impetuous decision, not really thinking of the consequences? You just…. say yes when you should have said no.”

I enjoyed this one, but IMO it wasn’t as good as the first installment in the series. Something was missing, but I can’t quite put my finger on it. Like I mentioned earlier, the story was full of angst and also drama, but fortunately it wasn’t overwhelming. What I enjoyed the most here was the chemistry, connection between the two main characters. It was fantastically done and so palpable. I loved Dylan and Cohen together and their relationship as neighbors/friends and later as lovers. They were good for each other in every single way and I’m not saying this because they said it first, but because I truly felt it. It safe to say they completed each other perfectly. Also their sexual tension was really great done. Loved it!

Dylan and Cohen’s journey wasn’t an easy one. Both of them make mistakes, but eventually they learn how to properly communicate with each other, how to trust each other, how to fight for a future together. Needless to say their relationship wasn’t quick and also it wasn’t easy. Honestly I really sympathize with them. While Dylan struggles to trust another man and to be vulnerable again, Cohen struggles with his ethical dilemma.

“I’ve lost track of the reactions I have to you.” His fingers brushed along the hem, taunting her. “I don’t know how to stop wanting you.”

I liked Cohen’s character a lot. He was wonderful, well developed and charmed me from the very beginning. I’m not gonna lie, he was an a** at times, but I truly understood his point, so I wasn’t so bothered, especially since after he finds out about Dylan’s past he become ‘her everything’. I enjoyed his personality. He’s strong, commanding and even intimidating, but he’s also sweet, caring and protective. I loved his tenderness towards Dylan and the way he loved her and eventually accepted all of her.

While I enjoyed Cohen’s character, I can’t say the same thing about Dylan’s. I liked her enough, but I wasn’t impressed. She was kinda weak IMO. She only finds the strength to fight her past only when Cohen enters her life. I felt for her, I did, but come on…she lived a reclusive life for six years without fighting against the man who destroyed her life, without fighting for her career and her future. So Dylan felt a little flat IMO, maybe because she wasn’t my fav kind of heroine or/and maybe because I didn’t relate with her at all.

If you’re looking for something angsty, steamy with just the perfect amount of drama, this might be the perfect read for you.

“You are the best mistake I could have ever made, and if ever there was a rule to be broken, it was the one that would have made us impossible.” He pulled back, focusing on her. “I…regret …nothing.”