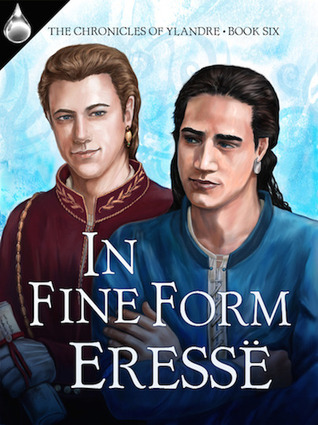 Guile is an asset in foreign relations, but an affliction when it comes to affairs of the heart.

A bastard of unknown parentage, Yandro Vaidon was born saddled with a huge disadvantage. The nigh rigid class structure of the dual-gendered realm of Ylandre relegated him to the bottom rungs of the social ladder and promised a dim future. Worse, the endeavor to win respectability was arduous—most claimed it was impossible. But by dint of hard work, perseverance and instances of plain good luck, Yandro rises higher than even he had hoped. However, he quickly learns there are hurdles to overcome even at these heights. Not least is his inconvenient attraction to a colleague deemed way beyond his reach.

Scion of House Essendri, the reigning dynasty of Ylandre, Jareth Hadrana is gifted with more than his fair share of beauty and wit. The kingdom’s preeminent ambassador, he has surpassed what is usually expected of a fief-lord’s second son. But while his high birth and family wealth opened doors for him, Jareth’s success stemmed from his own efforts to make something of himself other than the idle fop or swaggering rakehell that was the lot of many younger sons.

A coincidence of interest drew Jareth and Yandro to the same profession, but a king’s intervention throws them together in an association that soon turns into mutual desire. However, prejudices have largely kept the aristocratic True Bloods and lower caste Half Bloods on opposite sides of the social and romantic divide. In addition, reticence born of distrust and a secret like no other hamper their attempts to span the chasm between them. It will take more than their shared passion to convince them to lower their protective walls and risk their hearts in full.

Upon first glance of the dude on the right side of this cover, I immediately visualized my old Star Trek: Next Generation homie…Lieutenant Commander Data. Not gonna lie, I had way to much fun Data meme hunting. I have already stated that I am completely addicted to this series.

However, I feel like I have been chasing the dragon ever since book one. But let’s be honest fellow drug addicts, nothing ever compares to that first high. And now I be outta drugs completely because there are no more books in the series. I only hope the author is scribing a new hit for me.