I watch you, I see you in ways no one else can, and through my lens I create a life of you for someone to dissect. I capture you in your vulnerability; that smile, your laugh, those tears. I document you and sell your secrets.

When I watch you through my lens you’re mine until I pass you to the buyer. I, like most people, have a fetish for pretty things and in my job I get to be around a lot of pretty things. They pay me to watch them and capture them in a frame for many purposes, and sometimes I like my profession a little more than I should.

I took a job to capture her… I wanted to capture and keep her in more than just the image. This time I will take myself away from the lens and become the client because I cannot resist her, she reminds me too much of my first, I need to have her.

Traumatised from a vicious attack, Nina Drake finds herself shut off from the world until her neighbour brings her out of more than just her nightmares. Even after moving and changing her name, she still can’t shake the feeling of being watched. The memories are so close.

And so is the shadow of the creator of them all. 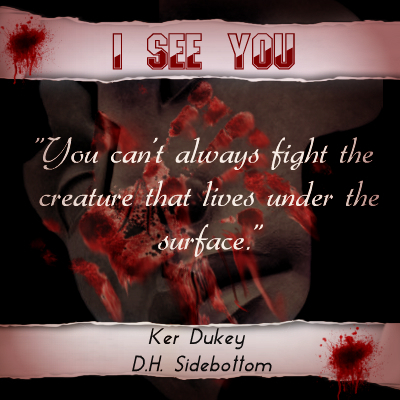 Every time I start a book by one of this two authors or a book written by both of them I knew what to expect – something dark, disturbing, fucked-up, twisted, fucked-up…Did I mention fucked-up? Because let me tell you these two ladies know how to write a twisted tale like nobody’s business. And this book was exactly that.“I See You” is a story that I wouldn’t recommend to everyone. If (at times) you like your dark reads gory and disturbing then this book might be for you. If not…stay away.

“Evil is real. It’s an entity living under the surface, waiting for the moment when you’re weak, when you’re beaten down by life to a point that realism blurs and everything we think we know, think we are, differ from reality. That’s when you know the monster wears your face, lives your life, and sees through your eyes.”

The story fallows three characters – Nina Drake and two brothers Devon and Noah Trent. Devon and Noah grow up in a family that was…let’s just say…not normal, dysfunctional and their childhood was very…sick. Devon works with, or more exactly for his brother, Noah who has a very unusual job. Devon loves photography and since forever he was “the photographer” in his family.

“What’s more powerful than living in the moment of someone’s death?”

When a client requests a young woman named Nina Drake, client -1325 to be brutally assaulted and raped Devon is in charge to fallow her, to take pics of her, to play with her mind. Devon he’s taken by Nina’s beauty and he wants to keep her, but Noah who’s always been in charge of everything decides to carry out his assignment.

A year later, Nina is changed; she’s an empty, hollow shell of a woman. She moved in a small town, alone, she doesn’t have any family or friends and she doesn’t get out of the house. At all. When she meets her new neighbor she starts to want more for herself. But her life changes irrevocably when she finds out who the ‘perfect’ neighbor really is.

“She’s femininity in its element; the fall of her long hair, her tiny waist, and her large breasts. She was created for monsters like me.”

A dark, disturbing, suspenseful thriller, “I See You” held my attention from start to finish and I was so enthralled by this story I didn’t figure out the big twist. And well, I’m glad I didn’t since the story was more captivating this way. The story is told in multiple povs, which I occasionally enjoy. In this case I really did since I felt in some way it was necessary. I loved being in these three characters’ heads. The story was engaging with some interesting twists and turns I didn’t expect. The story was very graphic and brutal at times, the narrations was great and the suspense well done.

Nina was a heroine I really felt for. Her past was brutal, but she finds the strength to move on and to take chances. And for that I really admired her. Noah was a sick, bastard. He was pure and simple evil. However, he was an intriguing character. Devon was not the usual hero. He was…let’s just say a very enigmatic character.

All in all, if you want something dark and raw, a little disturbing, yet captivating, this one might be the perfect read for you!