Deputy Roman Charsguard survived Afghanistan where he lost his best friend—his K-9 handler James. Roman was a military dog until two years ago when he developed the ability to shift into a human. It’s not easy to learn how to be a man. He found a place to live in Mad Creek, a haven for the secret world of dog shifters. Finding a reason to live has been harder. That is, until a certain human walks into the Mad Creek Sheriff’s office and starts making trouble.

Matt Barclay has the worst luck. First he was shot in a SWAT drug raid, then he was sent as DEA investigator to Mad Creek, a little town in the California mountains. Matt’s job is to keep a lookout for illegal drug farms, but nobody in the town wants him there. And then there’s Roman, Matt’s erstwhile baby-sitter. He’s the hottest guy Matt’s ever seen, even if he is a bit peculiar. If the town doesn’t kill him, sexual frustration just might. 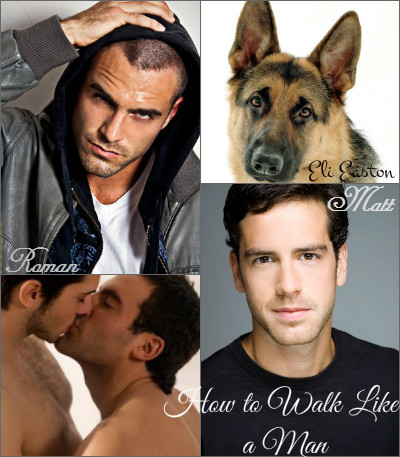 Once again Eli Easton delivered a heart-warming, sweet, humorous and tender tale. “How to Walk Like a Man” is the second installment in her PNR series entitled “Howl at the Moon” and tells the story of Deputy Roman Charsguard, character we met in the previous installment in the series. This second book can be read as a standalone, but I truly recommend you to also read book1. You won’t regret it!

Roman works as a Deputy in Mad Creek, a special little town with friendly, yet a little strange residents. He is a dog-human shifter, called the quickened. Until two years ago, Roman was a…dog, a German Shepard, a military dog. He lost a part of himself when his K-9 handler, James died. A man just like him, a dog-shifter told him about Mad Creek and he found his purpose in life again when he moved in this small town and started working with Lance, the Mad Creek’s Sheriff. Roman still learns how to be a man, how to act like a man, how to feel like a human.

Matt Barclay is a DEA investigator who’s sent to Mad Creek to keep a lookout for illegal drug farms. Nobody wants him there for the obvious reasons and he’s pretty sure this strange town hides something. But what? It’s his first job as a full-fledget DEA investigator and he’s determined to do a stellar job. Roman is assigned to ensure that Matt does not discover their secret, so for the next twelve months he will be his babysitter. He’s not too happy with his task, but Roman likes Matt so the assignment is not too awful. Matt is a happy human to be around and that makes Roman feel happy too, so everything is good, at least for now. The two men start working together, hiking together, laughing together and eventually they became some sort of friends. The feelings for each other start to change as the days and weeks pass, but both of them know getting involved with the other would be a huge mistake. It doesn’t help their situation the fact that Matt is in the closet or that he has a fake fiancée.

I really enjoyed this one! Eli Easton always writes entertaining stories with endearing, adorable protagonists and this little gem was exactly like that. Like the previous book in the series, the story was…well, suspenseful you could say, but this aspect is not the most important here. However, the story flowed smoothly and was entertaining from start to finish. The angst is low and the steam was pretty low, but I adored this sweet story.

Both main characters were well developed, likeable and funny to read about. While I liked both men I have to admit Roman was my favorite. He was simply adorable at times. He’s sweet, kind-hearted, honest to a fault and his innocence was very endearing. He made me smile so hard at times. Matt was pretty great as well. He’s kind and at times even protective with Roman and I loved him for that. I enjoyed the slow burn romance between them, how their relationship gradually changed from friends to more and the sexual tension who was delish. I also loved the tenderness between these two men. They were so great together.