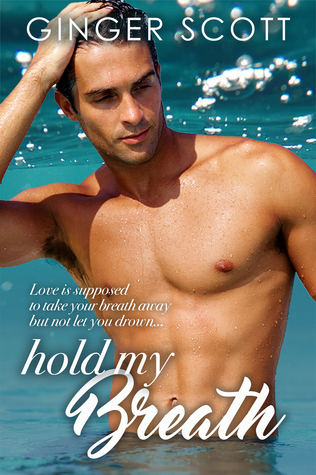 *** A new adult, contemporary romance about love, loss and forgiveness. ***

Fractions of seconds can do lots of damage. One decision can ruin lives. A blink can be tragic. And loving a Hollister…can hurt like hell.

They say the average person can hold their breath under water for two full minutes when pushed to the extremes. Will Hollister has been holding his for years. The oldest of two elite swimming brothers, Will was always a dominant force in the water. But in life, he preferred to let his younger brother Evan be the one to shine.

Evan got the girl, and Will…he got to bury all of the secrets. A brother’s burden, the weight of it all nearly left him to drown.

The daughter of two Olympians, my path was set the day my fingertips first touched water. My future was as crystal clear as the lane I dominated in the pool—swim hard, win big, love a Hollister.

My life with Evan burned bright. He gave me arms to come home to, and a smile that fooled the world into believing everything was perfect. But it was Will who pushed me. Will…who really knew me.

And when all of the pieces fell, it was Will who started to pick them up.

In the end, the only thing that matters are those few precious seconds—and what we decide to do while we still have them in our grasp.

“You’re the only thing that doesn’t make me want to drown,” Will says, and my hands fall softly into his hair. My lungs fill at the touch. “I think I came here knowing that you were my only shot at peace.”

Will Hollister carries the weight of the world on his shoulders. After losing both parents’ and younger brother in a plane crash and him being the only one to survive, he has no one left—except for his uncle. He has his demons and is constantly punishing himself for something that isn’t his fault.

Maddy Woodsen is a swimmer just like her parents. She started young and eventually broke many records. Maddy and the Hollister brothers became quick friends at a young age after spending so much time swimming and practicing together.

Maddy ends up falling in love with Evan Hollister, the golden boy, but tragedy takes him from her. Seeing Will again is bittersweet. She can’t help but resent him—even knowing it isn’t fair to him—for being the one to survive but is also glad he did make it out alive. Planning to ignore Will while he is back home training with her and her dad, Maddy realizes that it just isn’t possible. Instead she tries her best to be friends with him again.

Every second they spend together, whether it’s catching up or practicing, the harder it gets for Maddy and Will to keep their feelings at bay. But the secret that Will keeps may be the one thing that tears them apart.

“All of me is under his spell. I need Will Hollister, and whatever hurt I felt is nothing compared to the things his touch can do to me. I am numb. I am his.”

Will has a lot of baggage but was such a sweet guy with a heart of gold. He wasn’t my usual alpha male—more like a beta—but I still adored him nonetheless. The relationship took its time to evolve from friendship to more, so it was definitely slow burn. They’re both in their twenties but somehow I would feel like I was reading about two teenagers falling in love instead. I know that’s probably “sounds” odd but that’s how I felt.

The secret is known to us readers really early on in the story but I would’ve liked if it wasn’t revealed until more later in the book, just to keep us guessing and get that feeling of shock when the truth finally came to light.

This book was both incredibly heart-warming and heartbreaking, dealing with loss, guilt, grief, and forgiveness. Maddy and Will endured too much pain and hurt—and not just from the accident that took Evan and Will’s parents— but by everything else that life threw at them when they least expected it. What made everything a little easier was their support and love for one another and their family.

“My mouth craves her, and when our lips crash together, it’s like breathing for the first time—it’s weightless. It’s my joy. I found it.”

Overall, I adored the characters, the premise, and the romantic aspect of the story. I recommend it to those who love a sport romance with all the feels.