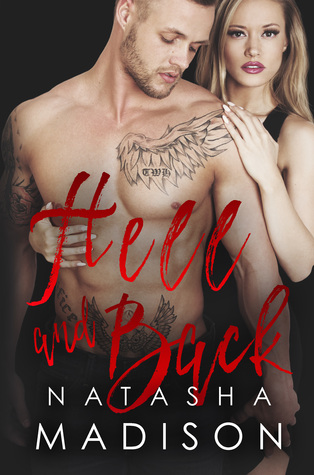 Meeting him was a fluke. Dating him was a mistake. Watching him become a drug addict put me through hell. Running was my only option.

I'm running from my demons and when I find out she's trying to escape her past, I know what I have to do.

One broken cop. One woman fighting for her life. A fragile love.

Sinister secrets that threaten to tear them apart.

They've been to hell. The hard part will be finding their way back together.

This was my first book by Natasha Madison and for sure won’t be my last because I really liked the author’s writing style. “Hell and Back” was equally heartwarming and heartbreaking and overall a great mix of suspense, action, drama and angst. The story fallows Bella, a young mother who just escaped from “hell”. Bella and his three years old daughter, Lilah, have been living for a long time in fear. Living in an abusive relationship wasn’t easy for Bella, sacrificing herself many times for her daughter over the years. When she finally realizes she deserve better than an drug addict boyfriend who abused her over the years in every possible way, she runs with her daughter at her grandmother house. She’s devastated when she finds out her grandmother passed away, feeling not only broken, but so very lonely as well.

Jackson lives across the street. He’s a detective working in the SVU department and from the moment he meets his new two neighbors he takes an interest in them. He figures out immediately the two of them are traumatized and that they are running from something or someone, feeling very protective of them from the very beginning. Even if Jackson is friendly, sweet and considerate, Bella is reluctant to accept that he’s a good man and that he’s interested in her well-being, at least at first, pushing him away with every opportunity. But as they get to spend more and more time together, she realizes not only that Jackson is a good man, but also that she deserves someone who can offer her stability and a good life, a man who is willing to do anything for her and her daughter without questions.

“You’re my perfect, you’re my salvation, and you’re my everything.”

Bella and Jackson’s story was fast-paced, emotional and overall well done. The author handled Bella’s situation with care and respect which I liked and appreciated. Overall I found the plot to be pretty develop with some interesting twists and I didn’t see coming which I loved since everything became more interesting.

The two main characters were well portrayed and endearing. Bella’s situation was heartbreaking to say the least and her story touched me deeply. She was a strong, brave heroine I liked from the moment she was introduced. I loved the way she cared for her daughter and how determined she was to finally offer her the life any child deserve. Jackson was an awesome hero. An alpha male, he was everything Bella and her young daughter needed. He was fierce and protective from the very beginning and while his insta-lust towards Bella bothered me a little, I really enjoyed his character.

I also liked all the suspense-action situations as the story unfolded. All of them were intriguing and in some way kept my interest until the end.