She upholds the law. He breaks it.

Two blue hearts, both alike in bravery
In not-so-fair London, where we lay our scene
From gun crime to petty theft
Where family is blood and survival makes hands unclean
In this place, we find two hearts who should be foes
And yet, amidst the turmoil their love still grows
Misadventure abounds and the divide will bring them strife
But with luck, death doesn’t always mean an end to life.

Hearts of Blue is a standalone contemporary romance that tells the story of star-crossed lovers Karla Sheehan and Lee Cross, a police constable and the thief who steals her heart. 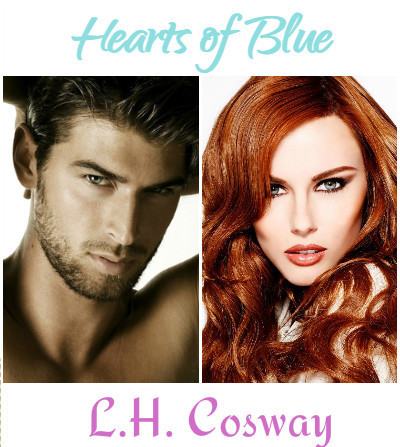 “It’s because you’re you and I’m me that we want each other, Karla. And I wouldn’t have it any other way.”

“Hearts of Blue” is the fourth installment in the series and like its predecessors it can be read as a standalone. It is an opposite attract/forbidden story, one of my favorite kind of story, so needless to say I’ve been dying to get my hands on it. Once again, L.H. Cosway delivered an intriguing, addictive tale and once again the storytelling was simply fantastic. “Hearts of Blue” features two characters we met in the previous book in the series – Karla, a police constable and Lee, a charming thief.

“The world isn’t blue, isn’t lonely any more, and though I was supposed to be the thief, she was the one who stole my heart.”

Karla is Alexis’s (the female main character from the previous book in the series, “King of Hearts”) roommate and best friend. She loves working as a policewoman, because she loves helping people. She’s not trusting the system entirely, but she’s determined to make a difference. The fact that her father, a Police Superintendent doesn’t believe a woman can’t succeed in the police force motivates her to become one of the best.

Due to a hard childhood, Lee Cross had to grow up really fast. From the moment his parents abandoned him and his three brothers, he took an important role in their lives. In order to provide for them, Lee was forced into a life of crime. And later his brothers fallowed his steps. Lee is not so proud about his illegal activities, but he will do anything to offer his brothers everything they want, so needless to say family is everything for him.

Lee felt something for Karla from the moment he laid eyes in her. He knew what he wanted from the start – Karla in his bed and since their first encounter he tried to charm her pants off. Karla has strict morals and she also knows who Lee is and what he does for a living, so she can’t fathom why he bothers with her, a policewoman, ‘the enemy’.

“One day, Karla, you’ll understand that me having my hands on you is never a bad thing.”

However, she can’t deny the strong attraction she feels for this sexy criminal. She knows Lee is bad news, so she tries hard to stay away from him and also to fight her tumultuous attraction she feels toward him, but is hard to do all that when the fate has other plans and she encounters this sexy bad boy everywhere she goes. The chemistry between them is sizzling, their attraction seems to grow, so they start something – dangerous, intense and in Karla’s opinion only temporary, because she can’t see a future with Lee.

”We were the same. Too stubborn and brave to know what was good for us, out on a mission to save everyone but ourselves.”

The story was fun to read, fast-paced and kept my interest from start to finish. While it wasn’t my favorite book in the series, I enjoyed it. It was sweet, sexy and fun, with a solid, unique I could say plot, with two endearing (for the most part) main characters and a cast of supportive character I’m dying to read about in the future.

Honestly the one who stole the show for me here was Lee. I loved him! He was yummy and his character was well developed from the beginning. He’s a good brother and despite his ‘job’ he’s a kind, noble man. He’s protective and supportive and let’s not forget the fact that he’s a great cook. One thing I loved about him is how cheeky he was at times..ok, most of the times. He simply was a fun character to read about. I loved how upfront he was with Karla about some aspects in their lives and also with his feelings for her. The man knew what he wanted from the start and he was determined to prove his love interest how good they are together despite the fact they are so different.

I still don’t know how to feel about Karla. She was a strong, smart heroine and I loved her determination and the fact that she has strong morals, but at times this fact annoyed the crap out of me. Why? Simply because I didn’t want for her to have them. Numerous times she was so unsure about everything – how to act around Lee, how to feel about him etc. so she was really frustrating IMO . While Lee showed Karla how much he wants her, first in his bed and later for more, Karla was at times a little bit indifferent. It goes without saying I didn’t like this fact.

I loved Lee and Karla encounters. Every interaction between them was fun and/or sexy and I loved them together. I enjoyed their slow burn romance, their sexy witty banter and of course the sexual innuendos. Their chemistry was well done, palpable and the sexy scenes were hot as hell. I loved the passion between these two.

Since I loved Lee so much, I really would have liked this story to be written in dual POV.

“Hurting with you is better than a painless life without you.”