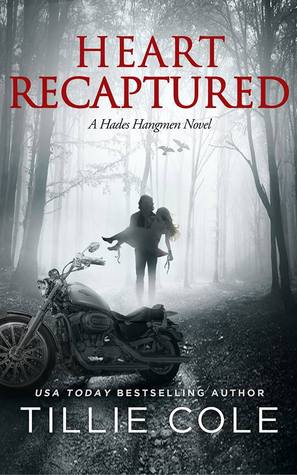 Even salvation can be delivered through the love of the damned…

Beauty can be a curse.

Faith can be a cage.

Only love can set you free.

A few long weeks after being reluctantly ripped from the comforting embrace of her sacred prophet’s religious commune—the only life she has ever known—a terrified Delilah is thrust into a world enveloped by evil and swimming in sin.

Steadfastly devout in her faith, and retaining the deep belief that her soul is innately tarnished as a branded ‘Cursed woman of Eve’, Delilah is determined to find her way home to her people in The Order and away from the corrupt and damned outlaw motorcycle club—The Hades Hangmen—who hold her at their secluded compound for her protection—a 'protection' she strongly resents.

Delilah yearns to return home, convinced that only amongst her own people, and under the holy guidance of the Lord’s revealed prophet, can her Satan-spawned soul be truly saved. Conditioned her entire life to believe she is a witch... a life-long temptress… the devil’s whore... Delilah increasingly resents her beautiful face, her shapely body and her sensuous effect on men. But when a man of the motorcycle club—a deeply sinful yet stunningly beautiful man—is charged with her care, Delilah begins to see that this dangerous and moralless sinner from the 'outside' may offer her something she did not know could truly exist: unconditional love.

Kyler ‘Ky’ Willis loves his life: a daily abundance of brotherhood, liquor, the freedom of the open-road and—best of all—his pick of hot women. Raised a biker brat and now VP of the most notorious MC in the States, Ky has no shortage of club sluts warming his bed; a situation he takes full advantage of… until a certain blonde enters his life… a gorgeous pilgrim-blonde he can’t get out of his head… a pilgrim-blonde he and his club recently-rescued from some backward religious cult… and a pilgrim-blonde he’s been ordered to keep the hell away from and his whorish hands off.

When yet another in a lengthy line of drunken blunders forces Ky to reluctantly take charge of the pilgrim-blonde’s care, he realizes that there could be more to this woman than just supermodel looks and a stacked set of tits. He begins to see that she could be the woman who could do the impossible—tame his wild ways and capture his reluctant heart.

But the unyielding bonds of Lilah’s past are strong, her ‘people’ determined and, with a new Prophet in charge and hell bent on revenge, they are mightily reluctant to let her go...

“Then it was all worth it.”
“What was, Li? What was all worth it?”
“Everything… Every single second of my life… because it eventually led me to you. It led me to fall so deeply in love with you, Ky… the man who recaptured this bruised and battered heart.”

OMG! I think this one was more dark and twisted than the first! This story is about Lilah (Mae’s sister) and Ky (Styx’s best friend). I said it before but I’m going to say it again… THIS BOOK IS NOT FOR EVERYONE. This story will no doubt disturb some readers.

Okay, let’s get down to business. As you know, this is Lilah and Ky’s story. Lilah has been taken away from the commune and thrown into the motorcycle club, where she is struggling to adjust. She’s thoroughly brainwashed and still holds strongly to her beliefs.

Ky is the Hades Hangmen VP. He’s handsome, a huge manwhore, and is extremely attracted to Lilah. He is assigned to teach Lilah about the outside world and get her to accept her new lifestyle. He wants her even though he knows he can’t have her. But like a moth to a flame, he can’t stay away.

“I was gonna have to babysit a fuckin’ Bible head case I couldn’t touch and all the time, no doubt, with the worlds worst case of blue balls. Perfect. Maybe there was a fuckin’ God up there after all and he was laughing his ass off at one of the devil’s men hankering for a taste of one of his own.”

You know how it goes from here. The more time they spend together, the more they fall for each other. When Ky falls for Lilah, he falls hard! He’s another protective and loyal hero… I really didn’t expect anything different though.

He went from being with a lot of women to a one woman man! And I LOVED IT!!

“…I’m changed; she’s changed me. I’m under her damn spell and I sure as shit don’t wanna get out.”

Lilah isn’t used to all the feelings she gets when she’s with Ky. With him, she feels safe. But with all her beliefs, she thinks he only wants her for her beauty and nothing more. Slowly but surely, Ky gets through her.

The connection between Ky and Lilah is beautiful. Ky is rough around the edges yet he’s gentle with Lilah. He’s more than meets the eye, that’s for sure.

“I’m gonna make love to you, Lilah. I’m gonna take you as mine, possess you. ‘Cause there ain’t no one out there… no one else who could do this to me, but you.”

I can’t recommend this series enough! It’s amazing! I can’t get enough of it!