He Will Be My Ruin
K.A. Tucker
Fiction, Romantic Suspense
February 2nd 2016
Yes

The "USA TODAY" bestselling author of the Ten Tiny Breaths and Burying Water series makes her suspense debut with this sexy, heartpounding story of a young woman determined to find justice after her best friend's death, a story pulsing with the "intense, hot, emotional" (Colleen Hoover) writing that exhilarates her legions of fans.
Twenty-eight-year-old Maggie Sparkes arrives in New York City to pack up what's left of her best friend's belongings after a suicide that has left everyone stunned. The police have deemed the evidence conclusive: Celine got into bed, downed a bottle of Xanax and a handle of vodka, and never woke up. But when Maggie discovers secrets in the childhood lock box hidden in Celine's apartment, she begins asking questions. Questions about the man Celine fell in love with. The man she never told anyone about, not even Maggie. The man who Celine herself claimed would be her ruin.
On the hunt for answers that will force the police to reopen the case, Maggie uncovers more than she bargained for about Celine's private life--and inadvertently puts herself on the radar of a killer who will stop at nothing to keep his crimes undiscovered 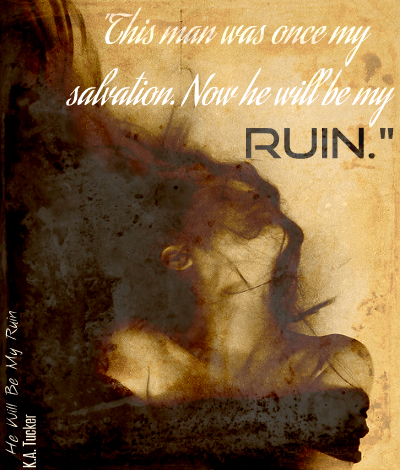 First and foremost I have to say I totally love the title. Not only because is that kind of title that remains imprinted on your brain, but also because the entire time I wondered who the hell is ‘he’. “He Will Be My Ruin” is a suspense/mystery novel without any romance elements (IMO, which I loved since I’m not really a fan of romantic suspense), but with some erotic ones that made this read pretty thrilling to me. This book was awesome and yes, I was hooked from the beginning. The prologue is fantastic, very smart and I actually had the feeling I was reading the epilogue. Maybe it’s sounds strange, but after you will read it if you decide to give this book a try, you will understand why.

This was a very gripping read and the good part is that it’s written is such a way that you will want desperately to know what’s really happening and what happened. So, yeah…it was a pretty addictive read. I have to say I really liked the blurb, it’s perfect for this kind of the story. You really don’t have/need to know anything else about what’s going on, so try to stay away from spoiler-ish reviews.

“He Will Be My Ruin” fallows the story of Maggie who flies to NY when she finds out that her childhood best friend, Celine , was found dead in her apartment. There are proofs that she committed suicide, but Maggie knows better – Celine wasn’t that kind of person. She is determined to find out what really happened with her no matter what. Only then she will find peace. But she never expects to discover that Celine had so many secrets. It seems Maggie knew only a part of Celine…

This story had me second-guessing from the beginning. The plot was solid, smart, very well developed and the pace of the story was simply perfect for a suspenseful read. I loved that some chapters are written from Celine’s POV. They were intriguing to say the least. If at the beginning the story seems…simple, as the story unfolds and secrets are revealed everything gets more and more complicated.

I liked Maggie a lot. She was the perfect heroine for a suspense/mystery novel – smart, strong and determined. I admired her loyalty and the fact that she cares so much about Celine even if they were not as close as they used to be in their teenage years. The supporting characters were intriguing, engaging and like Maggie, really well developed. Even Celine’s character development was fantastically done, character we practically don’t met at all. This was a suspense read, so of course I had my theories. Surprisingly I was right about some aspects of the story/secrets. But there were many events that totally blew me away. The last chapters were pretty intense and I couldn’t read fast enough and find out…what’s going on.

If you are a fan of this genre or if you want a break from your usual romance novels I really recommend this one. It will keep you entertained from start to finish with all the twists and turns and you will definitely have fun guessing what really happened with Celine.