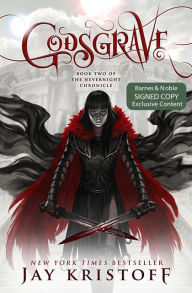 Assassin Mia Corvere has found her place among the Blades of Our Lady of Blessed Murder, but many in the Red Church ministry think she’s far from earned it. Plying her bloody trade in a backwater of the Republic, she’s no closer to ending Consul Scaeva and Cardinal Duomo, or avenging her familia. And after a deadly confrontation with an old enemy, Mia begins to suspect the motives of the Red Church itself.

When it’s announced that Scaeva and Duomo will be making a rare public appearance at the conclusion of the grand games in Godsgrave, Mia defies the Church and sells herself to a gladiatorial collegium for a chance to finally end them. Upon the sands of the arena, Mia finds new allies, bitter rivals, and more questions about her strange affinity for the shadows. But as conspiracies unfold within the collegium walls, and the body count rises, Mia will be forced to choose between loyalty and revenge, and uncover a secret that could change the very face of her world.

5 Stars
(And I’m being stingy with these this year, so this is a big deal, gentle friends.)

I originally marked this as 4+ stars.
But after further consideration of the following:

1) I read this book in ONE sitting because I was so spellbound.
And, 2) I re-read my review for book one and realized that ALL the things I said I couldn’t stand about book one, I adored about book two…

I decided to say, fuck it, 5 stars for everyone, folks. And because good on you, Sir Kristoff.

He really is a creative talent.

Now, if you read my review for book one (which you can find HERE), you will see that – while I enjoyed the overall story itself – I had problems with Kristoff’s almost satirical, dark humor style and his employment of footnotes as a narration tool.

For those who don’t feel like checking out that review (and who could blame you) or haven’t read the books, here’s a picture I jacked from it for reference of said footnotes: 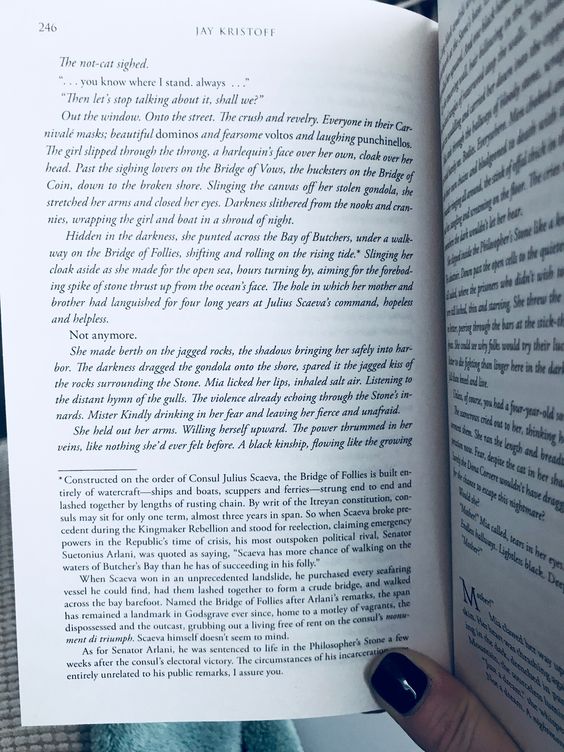 Now, perhaps it was the fact that I went into this book prepared for those things…or perhaps more aptly, I just went in to this one understanding Kristoff’s style and thus – now unclouded by confusion and its subsequent resistance – I was able to just absorb the story and its characters.

Either way, I just enjoyed the shit out of this book.

It’s original and edgy and weird and bloody and violent and I loved it.

And – after that ending – I can’t fucking WAIT for book three.

And now – after once considering tossing both books without even cracking book two open – I find myself fighting not to re-purchase book one in hardcover. I have it in paperback and it doesn’t match my book two hardcover (and future book three hardcover).

We can’t all be perfect.
And thank fuck.