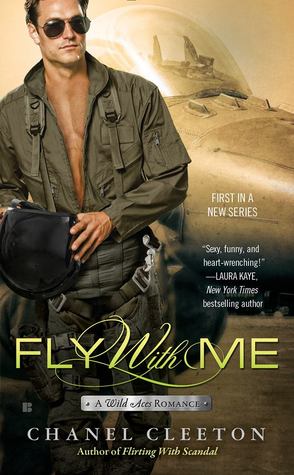 From the author of the Capital Confessions Novels comes the first in the steamy Wild Aces Romance series.

U.S. Air Force fighter pilot Noah Miller—call sign Burn—loves nothing more than flying hard and fast. When he meets a gorgeous and sassy woman while partying in Las Vegas, he immediately locks on to her.

Jordan Callahan owns a thriving clothing boutique, but her love life is far less successful. Her luck changes when six feet, two inches of sexy swagger asks her to dance and turns her world upside down.

One scorching weekend becomes an undeniable chemistry that they can’t leave in Vegas. But the long distance relationship and their different lives threaten to ground their romance. And when the dangers of Noah’s job become all too real, Jordan learns being with a fighter pilot means risking it all for a shot at love… 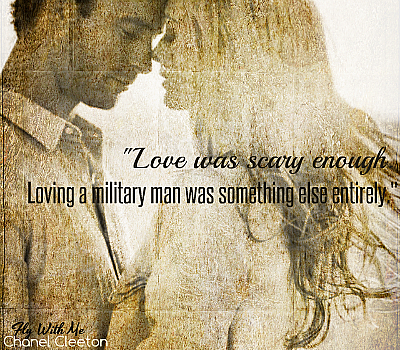 Chanel Cleeton delivered a delightful read that kept me glued to the pages from start to finish. A great blend of steam, witty banter and entertaining dialogue ‘Fly with Me’ was so much more than I had expected. Equally heartwarming and heartbreaking, this first installment in the series was enjoyable with two well developed characters I fell for from the very beginning.

“I didn’t want a caveman, but I wanted a man who knew who he was, and wasn’t afraid to be it.”

Jordan is in Vegas for her younger sister’s bachelorette party. She’s 30, independent and successful co-owning a clothing boutique with her best friend. She’s ready to party so she’s looking forward to feel good and maybe also meet someone. When she meets Noah she’s taken aback by his pretty face and likeable biceps, but also by his cockiness and sex-appeal.

“This guy just might be the Bigfoot of the dating world, and everyone knew you did not fuck around with that kind of possibility.”

Noah is 33 and he’s a U.S. Air Force pilot. Flying means everything for him, loving the adrenaline rush more than anything. He wants a wife, a family, but over the years he learned the hard way that not many girls are willing to stick around waiting for a guy who is gone more than he is around.

The chemistry between Jordan and Noah is off the charts from the beginning. After spending one scorching weekend together both of them admit there is something more between them, but a long distance relationship is almost impossible since they live in different States. On top of that, Noah’s job is dangerous, but Jordan is willing to try and take some risks for a shot at love.

I really enjoyed this one! ‘Fly with Me’ has a little bit of everything for you to be invested in Jordan and Noah’s story from the beginning. Told in dual POV, this first installment has two endearing protagonists that I really enjoyed reading about. Both Jordan and Noah were well developed and had depth and both of them were mature enough to know what they want from the other. Jordan was such a great heroine. I simply loved her portrayal. The woman is independent, successful and has her own business. She’s not afraid to take risks, she’s ballsy, free-spirited and she definitely knows what she wants in bed, embracing her sexually like no other. As the story unfolds we get to see how funny, thoughtful and considerate Jordan can be, not only with the man she’s falling for hard and fast, but also with others.

“It wasn’t just a kiss—I’d had good kisses before him. It was the rightness of it. The inaudible click that I felt between us.”

Noah was simply perfect for our heroine. Sex-on-a-stick he will leave you hot and bothered from the very beginning. Cocky, yet respectful, he was such a sexy dirty talker. But he was more than that. Sweet and caring and so tender at times, Noah was genuinely a good man and I have to say I really loved the way he was with Jordan.

These two simply fit together. I absolutely loved their chemistry…so well written and so palpable. I also loved the sexual tension between them, their banter and of course their sexy times. I couldn’t get enough of these two.

“He kissed me hard, his hand gripping the back of my head, tugging on my hair. His lips weren’t soft, his touch definitely not gentle. It was demanding—a kiss that yanked the lust right out of me until I was desperate for more.”

As for the supporting character, they were interesting, engaging and I’m looking forward to read more about them in the upcoming books.

If you are looking for a sexy, fun, emotional at times romance with two endearing main characters, sizzling chemistry and engaging dialogue look no further and try this first installment in Chanel’s ‘Wild Aces” romance series.