Sarah O’Brien is alive because of the pact she and her brother made twelve years ago — James will protect her from their violent father if she promises to never leave him. For years, she’s watched James destroy his life to save hers. If all he asks for in return is her affection, she’ll give it freely.

Until, with a tiny kiss and a broken mind, he asks for more than she can give.

Sam Donavon has been James’ best friend — and the boy Sarah’s had a crush on — for as long as she can remember. As their forbidden relationship deepens, Sarah knows she’s in trouble. Quiet, serious Sam has decided he’s going to save her. Neither of them realizes James is far more unstable than her father ever was, or that he’s not about to let Sarah forget her half of the pact... 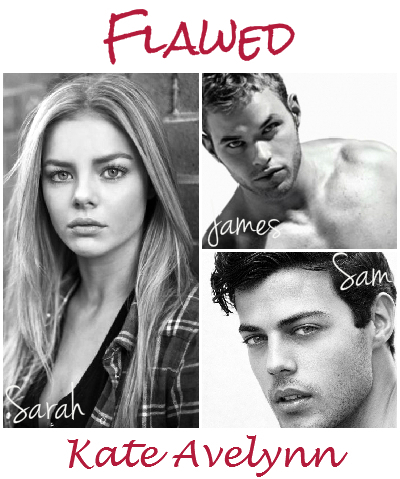 “I’ll always love you and make you happy,
If you only say the same.
But if you leave me to love another,
You’ll regret it all someday”

To say “Flawed” was an emotional read would be an understatement. I’m not gonna lie. I was exhausted when I finished this one. It was intense, heart breaking and depressing.“Flawed” is a story about life,family, love, loyalty, loss and so much more. It’s the story of Sarah and James, two brothers who grew up in a messed up home. Growing up with an alcoholic, abusive father and a drug addict mother wasn’t easy for Sarah (17) and James (19). James has always been Sarah’s protector. He has always been her best friend and the only one who really loved and cared for her. Years ago he made her promise to never leave him, to always be with him and love him no matter what. They have to endure one more year in that house until Sarah finishes high school and then they will be free.

”The only thing I want is to make you happy. You know that, right? Everything I do is because I love you”

If Sarah loves James like a brother, James wants more than a simple brother-sister relationship with her. Sarah had a crush on her brother’s friend Sam since forever, but he never was interested in her. At least she thought he wasn’t. But Sam secretly wanted and still wants more than a simple friendship with her. They start to spend some time together, they fall in love and they start a secret relationship to avoid problems with James. Everything changes for all of them when James finds out about Sarah and Sam’s relationship, that Sarah lied to him, that she betrayed him when he gave her everything.

“No, I love you. You’ve never loved me, even though it’s supposed to be me and you, forever.” He reaches for my waist and buries his sticky face in my stomach. “Why can’t I be enough? I want to be enough so fucking bad.”

First and foremost I like to say how perfect the title is for this book. These characters are all flawed trying to find their way, to be free. What made this book interesting and different for me from other books with the same premise was James’s character. I could tell from the beginning that’s something about him, that he is different.

And obviously he is since he’s obsessed with his sister and so possessive with her. I like to think it’s not his fault that he turned out that way, even if he as so unstable and unpredictable. Maybe because I found his character so endearing. Years he sacrificed himself to protect his Sarah and to give her everything she needs. She’s the only one who matters to him. He is loving, caring and protective with her. But he’s also a lost boy. My heart broke for him. I like to think all he wanted and needed was love and affection. I really don’t know! For me he wasn’t an anti-hero at all. He was a likeable character, even if he has his flaws. James’s character development is very well done. I really, really felt for him and I also felt his love for Sarah and also his pain.

Sarah’s character was well developed as well. She is strong and determined to change her life and also her brother’s life and despite everything she still has hope. At times it was hard to be in her head and at times it was frustrating. I don’t know what I wanted her to do, but I wanted to try to save all of them. But of course she couldn’t. I liked her loyalty towards James and how powerful her connection with him is.

Sam was more a side-character to me. He was so great with Sarah. He is loving and tender and attentive. He is what Sarah needs, but maybe, just maybe not what Sarah wants, because at times she seemed to be in love with James as well.

The ending was devastating and emotional and I didn’t see it coming, but I was ok with it.

All in all, “Flawed” was a wonderful read with an intriguing forbidden theme, a captivating plot and complex characters.

“You are my sunshine, my only sunshine.
You make me happy when skies are grey.
You’ll never know, dear, how much I love you.
Please don’t take my sunshine away.”