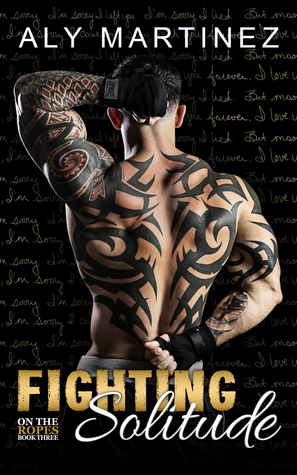 I was born a fighter. Abandoned by my parents, I spent my life forging my own path—one guided by my fists and paved with pain.

Untouchable in the ring, I destroyed everyone who faced me, but that’s where my victories ended. Outside the ropes, I repeatedly failed the few people who loved me. Including my best friend, Liv James—the one person I’d die to protect.

Even though I didn’t deserve her, Liv never stopped believing in me. Never gave up. Never let go. After all, she understood what I’d lost, because she’d lost it too.

Liv was everything to me, but she was never truly mine.

That was going to change.

I lost my first love, but I refused to lose my soulmate.

Now, I’m on the ropes during the toughest battles of my life.
Fighting to be the man she deserves.
Fighting the solitude of our pasts.
Fighting for her.

So, not gonna lie. I did NOT want read this book.

Yep, that’s right you heard me. As much as I OMG lurved books one and two, I think I subconsciously had every intention of putting this one off until at least, oh, my 90th birthday.

When I’m sure I would have then been able to read it on my knew “Space Age Super Kindle” that just magically implants the story into your head in three easy seconds. Why so scurred, you say?

The pet peeve-inous, “start-your-story-in-the-hole,” monstrosity of a hurdle also known as…

Which just makes me wanna crawl in a hole.

Because, as we all know, when faced with the “Dead Former Lover” phenomenon we are left in that horridly awkward situation in which one party – in this case the Hero – has the ex-girlfriend from hell situation that is hardest for the reader to swallow.

But because she’s fucking DEAD.”

Meaning, if she wasn’t dead…he would probably still be with her.

Leaving us to experience that oh-so-self-esteem-boosting experience of joining the heroine in feeling like, what? Or in other words… Now usually this blow is muted a little by the fact that said wife/girlfriend/lover is, well…dead.

And we don’t have to meet her.

Because, in this case, not only did we have the displeasure opportunity in book two to MEET said paragon…we actually LIKED said paragon.

So, not only do we have what in itself is just a shiteous situation, we now have the added dimension of having built a bond with said dead girlfriend.

And have now left the last book feeling perhaps a smidge of resentment for whom will be our heroine in the book we are supposed to be excited to read next. And on top of THAT, because we actually LIKED said dead girl – but she’s DEAD – we now have the added GRIEF angle.

Which I typically prefer to avoid. Like Donald Trump and his hair prefer to avoid wind… Long story short: I was not all that excited to read this.

But – it being the sometimes miraculous world we live in – somehow, someway, Aly Martinez herself apparently ran across my review of her previous book, Fighting Shadows, liked it, and gave little ole me a shout out on Facebook!

In all sincerity though, I was super flattered that an author I dig actually noticed something I wrote. And liked it enough to SAY so somewhere. Just like I truly am super flattered whenever any of my GR buddies said they liked my review and/or that it made them laugh.

Because, quite honestly, I’m fucking crazy.

And I know it. And half of the time I’m convinced that none of the shit I spew even makes sense.

But I digress. Again. Sorry!

Anysquee, Aly noticing my review must have been just straight divine intervention by the book gods.

Because as a result of that interplay, I got this ARC. And therefore got to read a book that I might otherwise have been too chicken shit to read any time soon.

Which would have been a travesty.

I should never have doubted Homie Aly.

Somehow, she took all the above mentioned issues…

..faced them head ON…

…and fucking smashed them all to smithereens. Smithereens I tell you.

Now, I am trying not to just uncontrollably gush here – not because this isn’t absolutely 100% gush-worthy – but because I don’t want to blow anyone’s expectations so high that a mere mortal story can’t compare.

Regardless, though – this book was just phenomenal.

Aly Martinez’s writing is seriously some of my favorite out there.
It’s smooth, it’s flawless, and you can’t help but get lost in the story and the characters.

On top of that, she is able to achieve that perfect blend of drama and poignancy that has ALL of the feels and ALL of the good angst – but without being cheesy and Days of Our Lives.

I LOVED Quarry and I LOVED Liv.

The way Martinez was able to build the foundation for their relationship throughout the years, while also somehow managing to avoid making it feel like constant flashbacks or the dreaded “Five Years Earlier” shtick that I hate – SCORE!!! – was seriously impressive.

And on that note, I’m going to stop here. I really want to avoid spoilers of any kind so that everyone can experience firsthand how Liv and Quarry come together.

Because any explanation I provide just wouldn’t do it any justice anyway.

For those on the fence about reading this – those peeps who I know are scared to tackle this just like me and my pussy up there were too? My advice to you is this:

Jump over to the “read it” side.

Because you won’t be sorry.

Me and FROP-Cat are so excited to start this, it’s unreal. “FROP,” for those not in THE KNOW, is what my college teammates and I used to coin the unfortunate “fat roll over pu$$y” phenomenon.

***ARC generously provided by author in exchange for an honest review***

I’m on the fence with this one. I adored Quarry and Mia and I know he will probably end up with Liv, but it’s all just so depressing.