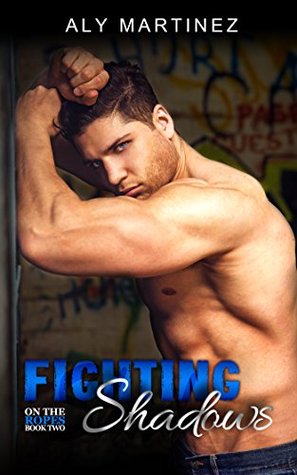 I come from a family of fighters. I always thought I’d follow in their shadows, becoming unstoppable in the ring. That changed the day I saved the life of a woman I loved, but could never have.

My brother hailed me as a hero, and my reward was a wheelchair.

Until I met her.

Ash Mabie had a heart-stopping smile and a laugh that numbed the rage and resentment brewing inside of me. She showed me that even the darkest night still had stars, and it didn’t matter one bit that you had to lie in the weeds to see them.

I was a jaded asshole who fell for a girl with a knack for running away. I couldn’t even walk but I would have spent a lifetime chasing her.

Now, I’m on the ropes during the toughest battles of my life.
Fighting the shadows of our past.
Fighting to reclaim my future.
Fighting for her.

This will be short. Cause I’m irritated, homies.

This was so good.

See how my “So’s” up there ^^^ just got bigger, bolder, more italicized, and more underlined?

Here, I’ll even throw in a picture. THAT’S how fucking good this was.

Be still my beating heart, what an awesome lead.

Seriously, the Page brothers are just truly the cat’s pajamas. And has something odd going on in the catummy area.

I liked Ash a lot too.

I mean, how could I not?

“She was hands down the strangest woman I had ever met. The jury was still out on her sanity, and her social awareness might as well have been nonexistent. She simply said whatever-the-hell thought was passing through her brain at the moment her mouth opened.”

I even loved the plot format. Unlike Fighting Silence, we didn’t have to go through the whole “start here” but then “five years earlier” rigmarole that acts as the bane of my reading existence.

The whole journal/highlighting thing with the Heart Breaking Work of Staggering Genius (A book I DNF’d so fast a few years ago it probably generated wind)…super cute. However, once again, Martinez ended this book in SUCH a fucking depressing way, it straight killed some of my joy.

And made me all book-ragey.

It’s like someone suddently pissed in my ice cream.

Which is a win for nobody.

And for that I knocked off a quarter star.

So take that, Joy Killer.