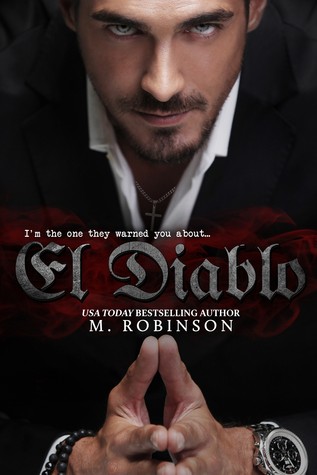 I was ruthless.
I was feared.
I had sacrificed. Myself. Her. Everything...

Living in a world where I was worth more dead than alive was a choice. I was a bad man, never claimed to be anything else. I’ve done things I’m not proud of. Seen things that can’t be unseen. I’ve caused pain that I can’t undo.
It was all my choice.
Every decision.
Every order.
Right and wrong never mattered.
Until her.
She was under my protection, until she became my obsession.
But who was going to save her...


From. Me. The devil himself.

Fate brought us together. Destiny destroyed us.

First, let’s all take a moment to stare and drool at this hot and delicious cover. After finding out his name, I may or may not have stalked his Instagram pictures. But you can’t blame me, right?

Okay, now let’s talk about the actual book. People weren’t kidding when they said this author was the queen of angst. This book put me through the wringer and I loved EVERY. SECOND. OF. IT.

Alejandro was one of those anti-heroes that you’re going to hate to love. He’s as ruthless as they come but when he loves, he loves hard. Being the son of a notorious crime boss, he was raised and molded to take over one day. Locking up his emotions so he doesn’t show any signs of weakness.

“I meant what I said, and I said what I meant. I never apologized for who I was or my actions.”

Then Lexi enters his life. Making him struggle with his feelings for her. The feisty woman who doesn’t back down from El Diablo. Her life hasn’t been easy and yet Lexi didn’t let that define who she is. When she had no one, she turned to the one thing that made her happy— ballet.

Alejandro wants her and at the same time knowing he’s no good for her… meaning he is constantly pushing her away. I’m going to go ahead and tell you, Alejandro is going to give you the worst case of whiplash known to man! But there’s times where you’ll see the real him. The man underneath the expensive suits and cold demeanor.

“I gave away my life and soul to be with you. I want you, it’s only been you. I don’t care where we will go, or what we will do. You are my beginning and my end.”

So you see, he’s a ruthless bastard with a heart. Sometimes his actions speak louder than his words. That’s why I couldn’t completely hate him even if I tried.

And when all the secrets came out, I had the shock of my fucking life. Normally I’m good at guessing what the secret might be in a book before it’s even revealed, but that didn’t happen here. I DIDN’T SEE IT COMING!

There’s so much angst, heartache, death, lies, and secrets, my emotions were everywhere. No matter how angry I would get I could NOT put this book down. I read it all in one sitting. If you don’t mind getting your heart ripped apart I suggest you READ. THIS. BOOK.