I dialed 9-1-1 before proceeding to attack him with my fancy new Krav Maga skills.

He quickly restrained me, then chuckled, finding my attempted assault amusing.

Of course, my intruder had to be arrogant.

Only, turned out, he wasn’t an intruder at all.

Drew was the rightful occupant of my new office.  He’d been on vacation while his posh space was renovated.

Which was how a scammer got away with leasing me office space that wasn’t really available for rent.

I was swindled out of ten grand.

The next day, after hours at the police station, Drew took pity on me and made me an offer I couldn’t refuse.  In exchange for answering his phones while his secretary was out, he’d let me stay until I found a new place.

I probably should have acted grateful and kept my mouth shut when I overheard the advice he was spewing to his clients.  But I couldn’t help giving him a piece of my mind.

I never expected my body to react every time we argued.  Especially when that was all we seemed to be able to do.

The two of us were complete opposites. Drew was a bitter, angry, gorgeous-as-all-hell, destroyer of relationships.  And my job was to help people save their marriages.

The only thing the two of us had in common was the space we were sharing.

And an attraction that was getting harder to deny by the day. 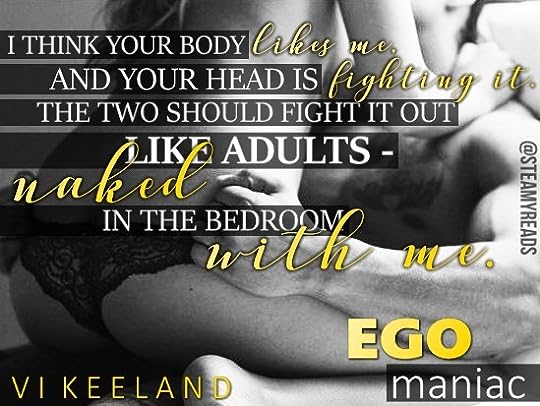 ➦Fuk it, 5 big ones. Because you know what? When you read so many books stuff starts blurring together. And this book stood out! I was completely and utterly satisfied by the end of it. Vi Keeland has a purrfect balance of fun banter, sexual chemistry and angst!

➦Drew is a lawyer and he owns his own practice. He goes on vacation and has his work space renovated. Comes back. Finds a woman in a storage room of his office re-arranging some shit. Because check this – she thinks it’s her office.

➦Yeah, that’s what I’M saying. So they have a bit of a stand-off in the storage room.

➦But then, of course Drew uses his charm to clear up the situation. Turns out the woman, aka Emerie, did, in fact, rent out the office in question. From a scammer.

➦Then whole bunch of other shit happens. Long story short, people, Drew takes pity on her and lets her run her practice from his office in exchange for her answering his business calls. Jackpot!

➦So what happens when Drew, who handles divorces for a living , and Emerie, who helps people salvage marriages through counseling, become friends?

➦You guessed it. And guess what else?

➦Fine. Just know that I loved the sexy times here! There are a lot of other things in this book that contributed to the character development and made me drool all over the kindle feel completely engaged with the story. I was never bored and the angsty ending was spectacular. I was legit teary eyed all the way through the epilogue – happy tears, people! <3

If you haven’t read this author before, then you should definitely rectify that. ASAP!! Because trust me, you don’t want to miss the awesomeness of Vi Keeland. I’ve read several books by this author and I enjoyed every single one of them, but ‘Egomaniac’ might be her best book to date. I loved the f@ck out of this book! It was definitely my kind of romcom and I hope Mrs. Keeland never stops writing them.

“I have moves. I swear. I’m just all sorts of off tonight because of everything that happened.”(…)“If we’re showing off moves, I’d be happy to demonstrate some of mine, too.”

Drew’s office space had been getting a renovation for the last two weeks while he was out of town on vacation. When one night, when he comes back, he finds in his office a redhead beauty who tells him the office space it’s hers, he’s more than astonished and amused. Since he’s the rightful occupant, then the strange woman is an intruder, a gorgeous intruder who seems to have some “interesting” Krav Maga skills.  Apparently, she’s not really an intruder since someone, a scammer, leased her Drew’s office space for a large amount of money.

Emerie feels like crap. Not only she feels like an intruder, but she also was scammed out of her life savings. She feels stupid and embarrassed, but also desperate since she doesn’t have an office anymore. Drew takes pity on her, so he makes her an offer she can’t refuse – in exchange for answering his phones while his secretary is away for a while, he will let her stay until she finds a new place.

As days pass by, Drew and Emerie realize that they are complete opposites – in every single way. While one is a pessimist, the other is an optimist, while one is angry and bitter, the other is happy and friendly, while one “destroys relationships” (divorce lawyer), the other help people save their marriages (marriage counselor). Needless to say, they don’t have anything in common…except the strong attraction that gets harder to deny by the day.

“I think your body likes me, and your head is fighting it. The two should fight it out like adults—naked in the bedroom with me.”

Once again, Vi Keeland managed to perfectly blend all the romantic elements I love reading about in a romcom. ‘Egomaniac’ was sweet, sexy, with just a little drama, delightful interactions, witty banter and two main characters I loved from the very beginning. This book held me at the edge of my seat from the beginning until the end. It made me smile, grin and laugh and even swoon a little and I honestly had a blast reading Drew and Emerie’s journey to happiness.

I loved Drew and Emerie – individually and together. They were such endearing, relatable, well portrayed characters. Emerie was kind of naïve, but sweet, thoughtful and patient and such a firecracker at times. I loved her feistiness, but also her positivity. Overall, she was an adorable, relatable character I really enjoyed reading about.

“I might not like to eat at fancy restaurants, but you’ll always be fed, and I’ll eat you until you’re the one screaming obscenities.”

I loved Drew! He might be the best hero this author had ever written so far. So, I have to admit here, he charmed me from the moment he was introduced. I liked the fact that he wasn’t really an a$$hole, his cockiness and I absolutely loved his sarcasm. This man was something else…in a very good way, of course! If at times Drew was angry and bitter, other times he was so, so sweet and thoughtful. Needless to say, he melted my heart, but I have to say that he also left me hot and bothered with his sexy, dirty mouth. I absolutely loved his dirty mouth!

As I said, I loved these two together. I loved how they get to know each other, their meals together and most of all their banter and playful interactions. Their back and forth was entertaining as hell and I loved their palpable chemistry. I enjoyed the pace of the story, the dual POV, the engaging story line and the ending which was…OMG, so damn sweet and perfect!

If you are looking for a sweet, sexy, lighthearted read, with plenty of funny moments, then you MUST read this one! You won’t regret it!

“You’re the color in my black and white world.”