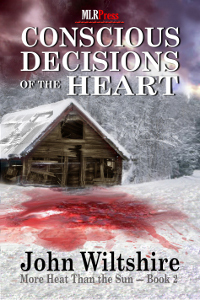 Ben Rider and Nikolas Mikkelsen learn that danger comes in all shapes and sizes and often in places you least expect it.

Nikolas's dark past calls to him, inexorably dragging him back into its seductive embrace. While he goes on an errand of mercy to Russia, Ben travels to Denmark to learn Nikolas's language. Convinced Russia's vastness will swallow Nikolas, Ben doesn't see the enemy much closer to home. Thinking he has lost Nikolas, Ben then makes a terrible decision that threatens to destroy everything they have together. Focused on this very personal horror, bound by a new level of commitment, they have no idea that a greater threat is coming. And when it arrives, it changes everything---even the definition of commitment.

Warning: This story contains the violent death of a minor character and some graphic violence.

This was really good.

The writing, of course, was awesome, as well as the tone and dialogue. Ben and Nik are just awesome together and their relationship grows and becomes more defined in this second installment.

Plus, we find out a lot more about Nik and his past (although I am a greedy hag and want more).

There was a lot of action in this one as well – although sometimes said action did not seem to necessarily fit perfectly into the frame of the story in my opinion.

The first book had spy/espionage type action that fit really well within the overarching plot and characters. In this one, however, while I was willing to accept Nik’s abduction by Anna/Gabby, the psychotic old librarian, I found the limits of my believability being tested by the tsunami at the end. It just didn’t flow well for me but, whatever, I’ll take it.

On to number three!