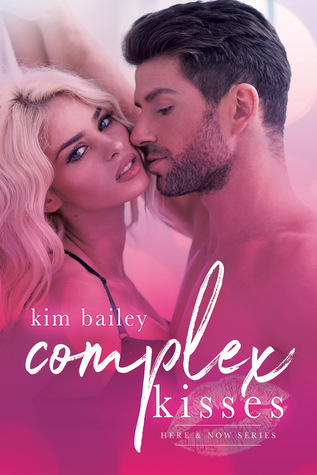 When lost and living in the moment …
… can you be found with just a kiss?

Jamie Hartley ran away, leaving grief and heartache behind. Lost on her own. Raising a child. Her plan is simple. Make it through. Find her path. Survive.

Eric Anderson walked away, abandoning plans and expectations. Living day to day. Waiting for miracles. His goal is complicated. Make it through. Find a way. Endure.

In stolen moments of passion and pleasure, Jamie and Eric find reprieve from their complex lives. Together, they ease the burdens. Together, they soothe the pain.
But can they recognize the future when it finds them?

Warning: This book contains graphic language and scenes that are sexually explicit.
Recommended for readers 18+. 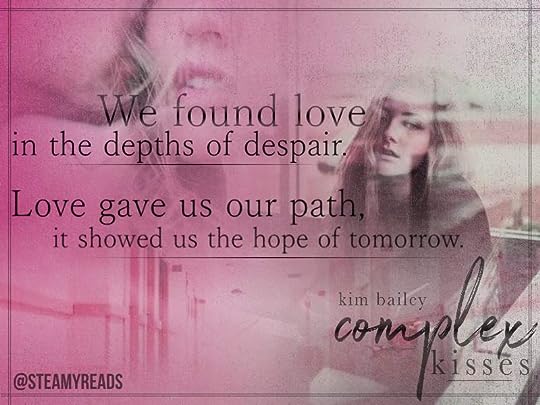 ➦I was really impressed by Complex Kisses – a debut novel from Kim Bailey! This beautiful story is about two people finding love in the midst of despair and helping each other get through hard times. Out of all the places to meet these two meet in a hospital.➦Jamie’s father is dying. And even though she has run away from home years ago and built her own life she comes back to town to see him. Jamie is a single mother and she lives for her son. She doesn’t date and she certainly doesn’t expect to find love in her old home town.➦Eric has put his life on hold after his younger brother has been diagnosed with cancer. He practically lives at the hospital while his brother gets treatment before the bone marrow transplant. Eric is exhausted and the last thing he expects is to console a crying woman who runs into his arms in a hospital hallway.

➦I really loved the dynamic between the main characters. The story was well paced and I never got bored. And that says a lot because I got an attention span of a frog. #truestory

➦The heroine is very refreshing! You’d think someone in her situation would be low on confidence in bed but she really knew what she wanted and she wasn’t afraid to take it. I found that pretty hot. 😀 Actually I found these two very hot in general – the sexual tension was off the charts.

➦Anywhooo, if you enjoy somewhat emotional reads, second chance romances with some healthy banter and strong supporting characters do give this book a chance! And I do have to say even though the book is angsty it wasn’t a “bawl your eyes out” kind for me. So if you are afraid to get upset – don’t be. I will be waiting (patiently) for Kim’s second book, which will be about Eric’s brother who is a total charmer. 🙂

Kim Bailey is a Canadian author. She’s a born procrastinator and sarcasm junkie. She gets her motivation from coffee, the fact that her teenage children haven’t disowned her, and the smile on her husband’s face when she tells him “maybe”.

When she was young and naïve, Kim dreamed of being a documentary filmmaker, and script writer. But when real life happened, she went to a job that actually paid her. Now she’s a customer support specialist by day and romance writer by night.

Writing is something she’s always done – she has about 20 million half-started story ideas. She may also be a slight exaggerator.

Kim promised herself to set her fears aside and make the dream real. She’s working on that, one day at a time.