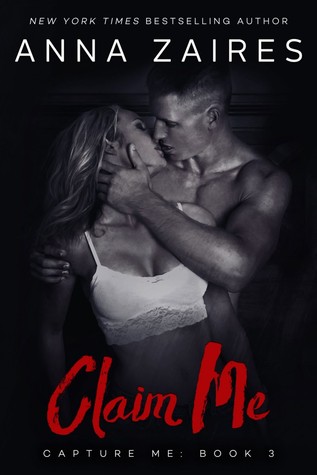 Book 3 in the dark romance Capture Me trilogy

She’s on the run.

Yulia Tzakova’s freedom comes at a heavy price. Her former captor dominates her dreams, and survival consumes her waking moments. She may have escaped, but she’s far from safe.

In the shadowy world of spies and betrayal, nothing is what it seems.

He’s obsessed with getting her back.

Lucas Kent’s rage knows no bounds. The danger of his job occupies his days, but hunting down Yulia is what he lives for. When he finds her, she’ll never escape again.

He’ll do whatever it takes to keep her.

Note: This is a LONG novel that concludes Lucas & Yulia’s story.

So before I say anything, let me just tell you now….

I am moving this Friday. As in the big “official” move with all the moving trucks, etc.

And I work graveyards the next two nights.

Which means I will be getting a negligible amount of sleep during the days I am supposed to be sleeping.

So there will be some major pre-move scrubbery afoot in these parts instead of slumber.

Also, being that I’m already tired…

And officially allergic to the smell of cardboard… This review is going to totally suck major donkey balls.

Saying that this was one of my most highly anticipated reads of the year so far would be a massive understatement.

And thank fuck this thing was as good as I wanted it to be.

So many times, a book you are SO looking forward to ends up blowing huge chunks.

I like to refer to this phenomenon as the “Wild and Free Effect.”

But anygrudge, as I was saying…

This book was a great continuation and conclusion to a wonderful series.

There were some twists and turns that I wasn’t expecting and I really enjoyed the epilogue as well.

Truly, this was a really awesome close to Lucas and Yulia’s crazy twisted romance.

Leaving me a very happy Val.