Twelve years ago, I ran to stay alive.

Port Royal, South Carolina, was my home. I was born there. I fell in love there. And I nearly died there. I never thought I’d go back. Now, after so many years, I have to return to bury the man who made my life a living hell. Some nights, I used to cry myself to sleep, praying my father would die. Other nights were different. Other nights, there was him.

My first confidante. My first kiss. My first love. My first everything: Callan was the glue that held me together when everything else was falling apart. He was my savior. He was there for me whenever I needed him…

Every night, I’ve seen the love of my life in my sleep.
I just never thought I’d have to face him again.

Living life through a camera lens is sometimes easier than dealing with it head on. Scratch that. It’s always easier. For over a decade, I’ve been a master of my art, taking photographs all over the world. Yet despite all of the countries I’ve visited, the amazing things I’ve seen, the beautiful women I’ve screwed, my heart has remained in pieces.

Coralie’s the only woman I’ve ever loved, will ever love. And I’m determined to show her that we’re meant to be together. Even if it means unearthing the bones of the past in the process.

A lifetime and a thousand miles have stood between us.
Now, there’s no length of time I won’t wait, no distance I won’t travel, in order to make her mine. 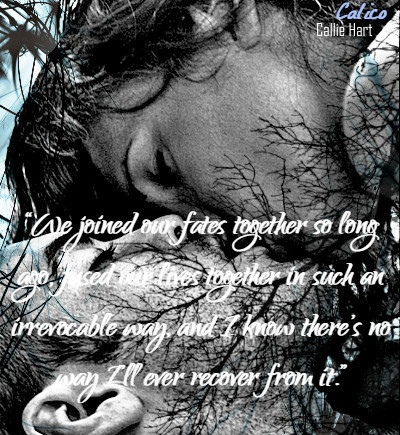 “When Shakespeare wrote Romeo and Juliet, he didn’t even come close to what we had.”

Callie Hart is a new to me author, so I honestly didn’t know what to expect, but after reading the blurb and seeing the lovely cover I decided to give it a try. I love second chance romances and while this one didn’t turn out to be one of my favorite books with this premise I’ve read so far, I liked it and I’m glad I’ve discovered a new author. ‘Calico’ was an intense read, well-paced for the most part and equally heartbreaking and heartwarming, with some well-balanced angst and drama and a great love story that will many readers’ hearts.

“The seas could have frozen over. The heavens could have come crashing down to earth. Time could have stood still, and I would never have been able to cleanse myself of you.”

Coralie and Callan grew up next door to each other, but they became friends pretty late, when they were teenagers. Everything between them progressed very fast. From practically strangers they became best friends and soon after something more, falling in love with each other hard. For more than two years Coralie kept something from Callan. To protect him she suffered in silence, but eventually her pain became too much, so forced by circumstances she left their small town leaving Callan behind.

“I know you. I see into you. Your heart is my heart. Your breath is my breath. Your soul is my soul. Your pain…your pain is my fucking pain.”

Coralie meets again Callan twelve years later when both of them are back in their hometown. While she desperately tries to escape her past and the boy, now man who used to means so much to her, Callan is ready to do anything to show Coralie that nothing changed between them, that she’s still his bluebird. He will not let her go. Not this time.

While I didn’t fully love this story, I have to say it was written pretty great. Actually the writing was one of my favorite aspects of the story. Both Coralie and Callan were well developed characters and they were likeable, if not from the beginning, as the story progressed. My heart broke for Coralie. Not only because she suffered so long without anyone knowing anything about it, but also because she was forced by circumstances to leave the one who loved the most. Callan knows what he wants. He’s determined to show Coralie that he’s the only one for her, making it clear that he still loves her and personally I liked that.

The romance between these two was great and the connection between them was palpable from the start, so expect some very hot, emotional sexy scenes.

Despite the fact that I liked this one, I had a couple of issues. First and foremost I found very hard to believe Callan and also his mother, a doctor, didn’t realize Coralie is abused physically and mentally. And I’m not talking about days or weeks…I’m talking about years. WTF?? Also, her neighbor who practically became Coralie’s protector in some way didn’t do anything to actually help the poor girl. It goes without saying I found these aspects of the story very unbelievable.

Also, some aspects of the story were OTT, others just angered me and others that were supposed to
move me, well….just didn’t.

Overall, this was just an ok read for me, but I’m sure it will be a winner for many readers!

“Behind us may be dark, bluebird, but I know it in my bones. There are great things up ahead.”