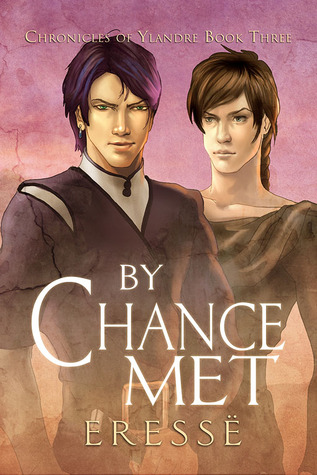 From the moment he laid eyes on the handsome Lord of Ilmaren, Naeth Orosse fell head over heels in infatuation with him. And after that first meeting in the middle of a tavern brawl in the dual-gendered realm of Ylandre, Reijir Arthanna did not forget the orphaned youth who came to his aid unasked. When fate brings them together anew, Reijir becomes Naeth’s guardian, which proves both blessing and bane when their mutual attraction is guilelessly nursed by one and distrustfully downplayed by the other.

Between attempting to ignore Naeth’s artless overtures and suppressing feelings he had long disavowed, Reijir has his hands full. But more than a title and duty were forced on this enigmatic cousin of Ylandre’s king. A less than benevolent past has left its imprint on Reijir who is as known for his cynical outlook on life as he is for his exotic features and proficiency between the sheets. Convincing him to risk his heart in love is a battle more experienced Deira than Naeth have waged and invariably lost.

So, I’m completely obsessed with this series right now.

Like as in the Tom Cruise style “I’m so obsessed with Scientology I shall laugh maniacally” kind of obsessed. I know this series kind of…different…

I freakin’ DIG it. Book One is still my favorite, of course.

Nothing and no one can compare to Rohyr and Lassen in my opinion.

And while I at least liked Naeth and Reijir more as people than I did Riordan from book two, I didn’t necessarily feel their connection as strongly as I did with the couples from books one and two.

Still, a really good story against a backdrop of outstanding world building.

Something else I think the author does that is really cool is tell each story in a timeline that interweaves itself into the timelines of the previous books – thereby making the time frame make sense and giving us even more details from those previous book relationships – but without being repetitive in any way.

Pretty neat trick if you ask me.

Well I would actually put some true effort into this and make this review an actual review, but like I said: