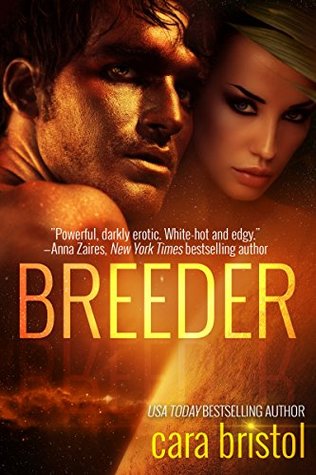 She was only meant to be the Alpha Commander’s slave…but she became his everything.
High Commander Dak, a ruling Alpha of planet Parseon, purchases Omra strictly as a breeder slave. He intends to impregnate her, produce a son, and hand her off to his anointed beta partner, Corren. Any infractions of the rules by her will be harshly punished.
But as Dak and Omra discover a sexual bliss banned by law, Dak begins to question the traditions and ways of his people, causing him to jeopardize his command and endanger the life of the woman he has come to love.
Dak has enemies, men who will not hesitate to exploit his fondness for Omra, and use it to portray him as unfit to rule as Alpha. Can he expose the rampant cruelty and corruption in Parseon culture… or will the protocol he's spent his life defending, be the weapon used to destroy them and their love?

I love books that create and operate in a whole new world with its own set of rules.

I think that’s why I love PNR and fantasy so much.

In this book, we are taken to a world where space travel is possible and men and women on planet Parseon are treated as two completely different classes.

Men are basically the cynosure of the community.
They are divided into two sub classes: alphas and betas.

Alphas and betas engage in homosexuality and homosociality and pair off as couples for status.
It is looked down upon to be attracted to females and females have no place.

In fact, woman are there only to clean house and, as the title suggests, act as breeders. Now, I’ve read books with a slightly similar theme – and I’ve been told The Handmaid’s Tale is somewhat along this vein also (?), but I’ve never read that book and I’ve only seen previews for the Hulu show based on the same.

I put in for this ARC because I saw that was recommended by Anna Zaires…and ya’ll know how I love Anna Zaires.

That said, I did not love this as much as I have loved Zaires’ material, but I enjoyed it just the same.

I look forward to more from this author.