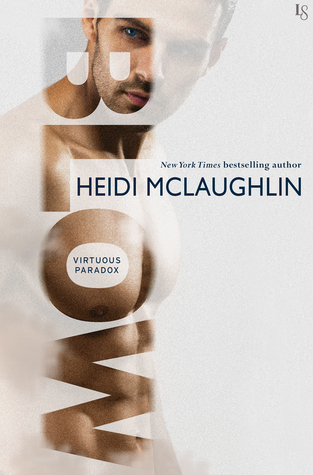 Meet the complicated men behind the sexiest boy band in America! In Blow, the start of an emotionally charged series from bestselling author Heidi McLaughlin, an insatiable heartthrob gets blinded by the spotlight—and learns to fight for love.

Bodhi McKnight has always had everything handed to him on a silver platter: fame, success, money, girls. The raven-haired, blue-eyed hottie is the son of Hollywood A-listers, and when he’s asked to join the boy band Virtuous Paradox, his star shoots even higher. But so do expectations, leading Bodhi down a destructive path of addiction—until a drop-dead gorgeous guardian angel shows him her sizzling brand of tough love.

When Bodhi ends up in rehab, he doesn’t expect to meet someone as cool and down-to-earth as Kimberly Gordon. Although he’s enjoyed the company of beautiful, charming women before, none of them have tried to get to know the “real” Bodhi. But Kimberly isn’t fazed by his stardom. She’d rather go horseback riding, teach Bodhi to play guitar, or ask him about his feelings. Soon Bodhi realizes he’s fallen head over heels for her. He just hopes that he’s strong enough to protect what they have from all the pressures and temptations of the outside world.

Includes a special message from the editor, as well as an excerpt from another Loveswept title.

‘Blow’ was my first book by this author and while it didn’t impress me as much as I wanted, it won’t be my last since I quite enjoyed the author’s writing style. This first installment in Heidi McLaughlin’s ‘Virtual Paradox’ series was fast-paced, in some way taboo with an interesting premise.

‘Blow’ tells the story of Bodhi McKnight, member of Virtuous Paradox, a notorious pop boy band. He loves his life as a musician, the women, the parties, but also the alcohol and drugs, because Bodhi has a serious cocaine addiction. When his father, a well-known Hollywood director finds out about Bodhi’s  addiction, he sends him to a rehab facility. There he meets Kimberly Gordon, who will be his friend for the next 30 days, caring for him and helping him understand his addiction. Bodhi is fascinated by Kim from the moment he lays his eyes on him. While he feels ashamed for his new “condition” he wants to know Kim better in every possible way. He loves everything about her – her compassion, the way he treats him and of course her looks and all he wants is to show her and to prove her that he can be a different man. Kim like everyone else knows who Bodhi is. She knows his reputation and she knows she should stay away from him since he’s a patient and everything, but she can’t deny Bodhi intrigues her like no other man she met before. If at first Bodhi and Kim try to stay away from each other, as they get to know each other better they realize they can be great together if they really want to.

The story’s premise was interesting for me to give this one a try, but sadly this was just an okay read for me. While I liked the concept of the story and even the writing, the lack of depth, the predictability and in this case, also the insta-lust didn’t work for me at all.

Both Bodhi and Kim were okay characters but I didn’t find anything remarkable about them. Sadly, I didn’t connect with them at all. Their age isn’t mentioned as the story unfolds, but unfortunately I found both of them to be a little immature at times. From the moment I’ve read the blurb I was interested in these two characters’ forbidden story, but IMO even this aspect was just meh. Maybe because I expected the story to focus on this aspect more.

The chemistry between them was well done and palpable and I really enjoyed it, but the romantic aspect between them was poorly done in my opinion. Tere wasn’t any insta-love between them, but their relationship progressed way too fast for my liking. I wasn’t convinced at all they are in love with each other or…whatever. Also, the lack of communication between them annoyed me to no end.

Needless to say, almost every aspect of this story was rushed or underdeveloped. At least for me. I wouldn’t have minded the story to be longer and at least one the story’s aspects, preferably the relationship between the two main characters to be more developed.

Overall, just an okay read for me!