The first time I met Caine West was in a bar.
He noticed me looking his way and mistakenly read my scowling as checking him out.
When he attempted to talk to me, I set him straight—telling him what I thought of his lying, cheating, egomaniacal ass.
You see, the gorgeous jerk had wined and dined my best friend--smooth talking her into his bed, all along failing to mention that he was married.
He deserved every bit of my tongue-lashing and more for what he'd done.
Especially when that lazy smile graced his perfect face in response to my rant.
Only it turned out, the man I'd just told off wasn't the right guy.
Oops. My mistake.
Embarrassed, I slunk out without an apology.
I was never going to see the handsome stranger again anyway, right?
That’s what I thought…until I walked into class the next morning.
Well, hello Professor West, I’m your new teaching assistant.
I’ll be working under you…figuratively speaking.
Although the literal interpretation might not be such a bad thing—working under Professor West.
This was going to be interesting… 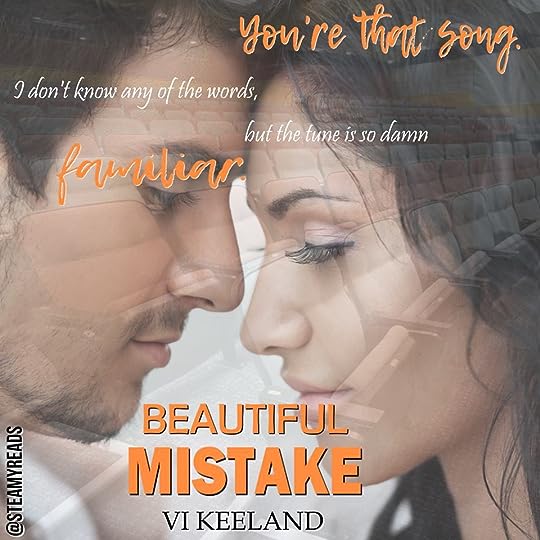 There are some authors out there that whenever they release a new story, I can’t wait to get my hands on it and I’m usually always guaranteed to love it. Vi Keeland is one of those authors for me, whether it’s one of her own or one of her collaborations, I always wait with real anticipation for the release.

Beautiful Mistake was just pure awesomeness; it was full of humor and a lot of scorching hot and steamy scenes that had me fanning myself incessantly. For anyone out there who is a Vi Keeland fan, I urge you to read this book ASAP as you are sure to love it as much as I did.

Rachel works at a local bar to help pay for her college tuition. One night she is at the bar with her best friend Ava, to help her begin to mend her broken heart by drowning her sorrows. Ava, in her inebriated state, is sure she sees her ex. Her ex who was MARRIED to someone else the whole time they were together. Rachel takes it upon herself to tell this two timing loser what she thinks of his cheating ways.

Rachel soon discovers that the guy she verbally attacked was not Ava’s cheating ex. It was a case of mistaken identity which was not surprising given Ava’s physical state. She couldn’t tell the difference between a blue shirt and a brown. Rachel leaves the bar feeling completely mortified about telling off this hot stranger.

“The music blared.
The only thing I could see was blackness.
But God, could I feel.”

Aside from working at the bar, Rachel is also studying her masters in musical therapy and has taken on a TA position for a professor she has heard a lot of rumours about, not all were favourable either. One thing she has learnt is that the professor has no tolerance for tardiness. When she turns up to the first lecture (late of course), she soon discovers that fate has one hell of a wicked sense of humor. No prizes for guessing who the professor was. Yep, that’s right, the hot stranger, she unleashed her tirade on at the bar the other night. She knows she definitely has some explaining and apologizing to do.

Caine West is the music professor at Brooklyn College and has lived the rock star lifestyle. He was previously a drummer in a band. Now he is possibly the most feared and loathed professor at the institution. Not all rumours Rachel had heard about him turned out to be true and sometimes you just have to make up your own opinion about people. Sometimes events can warrant acting harshly towards other people. When Rachel and Caine first start working together she calls him out on the rumours she had heard about the professor. After he explains himself, I believe his actions were more than warranted.

The sexual attraction and chemistry between Rachel and Caine literally jumped right off the pages and was absolutely electrifying. I just knew this couple lusted after each other something fierce and I read eagerly until they finally gave in to their attraction. They were so hot and intense and everything about them together just worked for me.

I loved this story from the first word read until the very last, it hooked me right in and I just fell in love with this plot and these characters. This book just ticked all the boxes for me and I would absolutely recommend this to anyone who wants to read a hot, sexy, humorous story with a sexy as sin academic and his fiery assistant with attitude to boot. I love Vi Keeland and can’t wait to read what she brings out next.

The class was completely empty. I wasn’t even sure he knew I was still in my seat. If he did, he was good at ignoring me as he packed up his laptop.

“Contrary to the rumors you’ve probably heard, I don’t bite.”

I jumped when he spoke. Now that the lecture hall was no longer filled with students, the acoustics of the large space bounced his deep voice all over the walls.

I stood and began my walk of shame down to the front of the classroom. There was no doubt I owed the man an apology, even if he wasn’t a professor—a professor who would be my new boss for at least the next fifteen weeks. I wanted to kick myself in the ass for not apologizing last night before I left the bar. Now it would seem like I was only doing it because of the situation I was in.

Which was true, don’t get me wrong, but I didn’t want it to seem that way.

I took a deep breath. “I’m so sorry about last night.”

His face was unreadable. “I figured you might be, right about now.”

“I obviously thought you were someone else.”

“So I assumed. You thought I was the asshole. The one with the big dick, was it?”

I shut my eyes. For the last ninety minutes, I’d replayed the entire exchange from last night over and over in my head. I thought I’d remembered everything I said, but apparently I hadn’t. When I reopened my eyes, Professor West was still watching me. His stare was pretty damn intense.

I started to babble. “My friend Ava went out with this guy Owen for a month or so. He was full of shit from day one, but she didn’t see it. Actually walked up to her when she was leaving work one night and said, ‘Do you mind if I walk you home? My mother always told me to follow my dreams.’ She fell for it, the entire act, from the first day. Then one Saturday, he was supposedly out of town on business, and she was across town running errands for her mother. She took a shortcut through Madison Square Park on her way back from the grocery store and ran into him. He was with his wife and kids.”

“And you thought I was him, apparently?”

I nodded. “She came in during my shift and started drinking Long Island iced teas. When Owen walked in, she pointed to where he was standing and said he was the one in the blue shirt.”

“And we were both wearing blue shirts, I take it?”

I couldn’t help but smile, thinking of Ava last night. “Actually, no. Ava’s not much of a drinker. Turned out she was more sloshed than I thought. Owen’s shirt was brown—not even black that could be mistaken as navy or something.”

“Anyway, I’m really sorry. I barely gave you a chance to speak, and then when I realized what had happened, I was so mortified I didn’t even stop to apologize.”

“I accept your apology for last night. Even though you shouldn’t be approaching a man in the hallway to tell him off alone, your intentions were admirable.”

I should have shut up and been grateful he’d accepted my apology. Should have. “Why can’t I approach a man in the hallway?”

He leveled me with a stare. “Because you’re five foot nothing in a loud bar, and no one would have heard you if I’d dragged you into the men’s room and locked the door.”

I folded my arms over my chest. “I can take care of myself.”

“I didn’t say you couldn’t. I said you shouldn’t put yourself in those situations.”

“But you insinuated that I couldn’t by making that statement.”

He zipped his leather bag closed. “Ms. Martin, I just accepted your apology for calling me an asshole last night. Would you like me to retract that acceptance?”

God, I really was an idiot. Being around this man seemed to turn me into a psychopath. “No. I’m sorry. I acted like a jerk, and I’d like to start over, if that’s possible.”

He nodded. “Everything prior to this morning is forgotten.”

“But this morning is not. I won’t accept lateness. Don’t let it happen again.”

He lifted his worn, brown leather laptop bag over one shoulder. “Meet me here at five tomorrow. We’ll go over the syllabus and the classes you’ll teach, as well as my grading rubric.”

That was smack in the middle of my shift, but I’d figure something out. “Okay.”

“Are you done for the day?”

“I am. I actually have to get to work. I’m covering Ava’s shift because she isn’t feeling too well after last night. We both work at O’Leary’s.”

That earned me a full smile from Professor West. God, he should do that more often. No, forget that. He definitely shouldn’t.

We walked through the halls together and out to the parking lot. When we arrived at my car, I stopped. “This is me. So…five o’clock tomorrow?”

Professor West looked at my beat-up old Subaru. “You’re parked in a spot reserved for the Provost. You got a parking ticket.” He squinted. “Actually, it looks like you have two parking tickets. Was your inspection expired or something?”

Crap. “Umm…no. I keep an extra ticket in the glove compartment and stick it on my windshield when I’m forced to park illegally.”

His brows shot up. “Inventive.”

“They need more parking. When you’re late, it’s impossible to find a spot.”

He studied me. “Lateness is a frequent occurrence for you, I take it?”

“Then I should clarify something I said earlier.”

He took a step closer and leaned in. “I’m glad to hear that, Ms. Martin. But that’s not what needs clarification.”

I swallowed. God, he smells good.

“Earlier I told you I didn’t bite students.” He smiled, and I felt the wickedness from it shoot down to some interesting places. “I don’t. But I make no promises about not biting feisty TAs.”