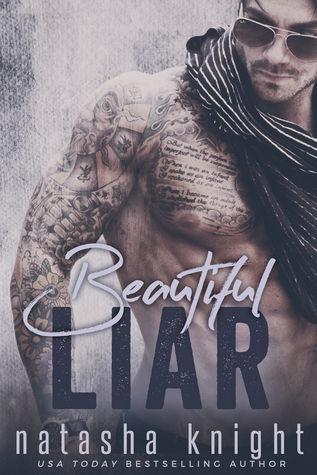 "Everything I believed was a lie. Everything except for her, the one person I blamed for it all."

MacKayla Simone was beautiful. She was sexy as hell. She was also the set-up.

Sex that rocked my world.

Rocked it to its very foundations because the next thing I knew, she and I made the headlines of every paper, every news channel across the country, and it cost me everything.

But that wasn’t the worst of it. That came when I learned who was behind the set-up. That was when I understood what it meant to be destroyed absolutely.

I don’t know why I went after MacKayla. She’d been a pawn just like me. But it was all I could do, all I had left. Hell, it was the one thing keeping me from tumbling into the abyss and never coming back into the light.

Find her. Find the girl who’d fucked me. Find her and make her pay. 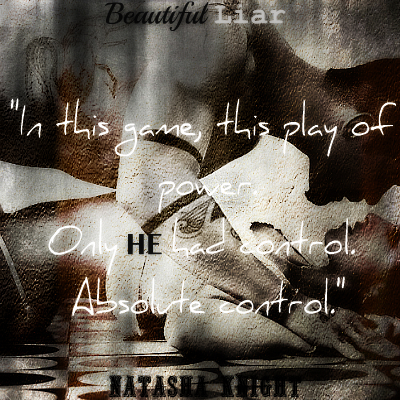 Natasha Knight delivered an intriguing read about revenge, moving on and finding love that despite my 3 stars rating kept my interest from start to finish. ‘Beautiful Liar’ was my second book by this author and while I didn’t enjoy it as much as the first I think it was a good read that had a lot of potential. To be honest I have mixed feelings about this one. There are aspects that I liked, but there are also aspects that I found a little underdeveloped or OTT. I think it’s just me since once again I’m in minority, but sadly this is how I felt.

Slater Vaugh is a man who knows how it feels to lose everything. Until three years ago he was known as a respected politician, but his life changed in one single night, a hot night that he spent with HER, a woman who disappeared after she ruined his life. He doesn’t exactly want revenge, maybe because deep in his heart knows it’s not her fault his life was a mess for so long, but he wants for HER to pay in some way. She owns him. He has been looking for her for three years and now that he found her he’s ready to make her pay.

“He was the one who held the key to my freedom. As strange as it sounded, he was my salvation.”

MacKayla still regrets what she did three years ago. She knows what she did was wrong, but she had her own reasons. She started her life over in another city, by day working in a bookstore and by night working as a stripper. She doesn’t like to be a stripper, but she has to do it if she wants to help financially her younger sister and her baby niece.

When MacKayla runs into Slater she knows he will make her pay for her sins and she’s ready to accept everything he has in store for her.

“He was the one who held the key to my freedom. As strange as it sounded, he was my salvation.”

For so long Slater felt only hate and anger for this woman who helped the ones who wanted to destroy him take everything from him, but when he meets her again he feels something more for her. Despite the fact he feels a strong attraction towards her, he’s ready to make her pay her debts.

I liked this one, but sadly it didn’t wow me. I liked the premise and for some reason I expected the story to progressed differently. I expected something…grittier I guess since it’s a revenge story. I liked the plot until it became a little OTT, at least IMO. Why? Simply because the characters didn’t stay true to themselves. And I’m talking about our hero, Slater. At times his actions made no sense to me. On top of that the multitude of sub-plots felt a little bit too much. I would have preferred the author to focus on the two main characters’ relationship more than on the other issues that occurred as the story unfolded. Despite all that, like I mentioned above I was invested in the story until the end since I liked the premise and I was eager to find out how everything will progress.

Both main characters were flawed, likeable I guess in their own way and both of them were portrayed pretty great. I understood why MacKayla did what he did three years ago and I appreciate the fact that she was willing to do anything to help her younger sister. As for our hero Slater, I liked his possessiveness and the way he cared later into the story for MacKayla.

“I own your nights, MacKayla. In the small hours, I am your master.”

The steam aspect was pretty high. Honestly I didn’t expect the story to be so steamy, but I can’t complain since all the steamy scenes were satisfying to say the least. Also there are some light bandage scenes that I found to be pretty hot.

Overall, this was a good read IMO and even if it wasn’t a total winner for me I’m sure many readers will enjoy this one more than I did.