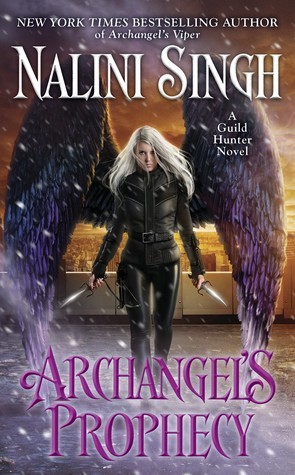 Midnight and dawn, Elena’s wings are unique among angelkind…and now they’re failing. The first mortal to be turned into an immortal in angelic memory, she’s regressing. Becoming more and more human. Easier to hurt. Easier to kill.

Elena and Raphael must unearth the reason for the regression before it’s too late and Elena falls out of the sky. Yet even as they fight a furious battle for Elena’s very survival, violent forces are gathering in New York and across the world.

In China, the Archangel Favashi is showing the first signs of madness. In New York, a mysterious sinkhole filled with lava swallows a man whole. In Africa, torrential monsoon rains flood rolling deserts. And in Elena’s mind whispers a haunting voice that isn’t her own.

This time, survival may not be possible…not even for the consort of an archangel.

So, a couple things before I get started…

1) Based on preliminary reviews, I seem to be in the minority in not adoring this book.
2) This being an ARC, I can’t really tell you why that is, specifically. Sorry.
3) I am NOT in a reviewing mood today (or just lately in general, actually), but I wanted to get at least something down while this book is fresh in my mind and before I read it again.
4) This review is probably gonna suck ass. Again, sorry.

That said, keep all that in mind when reading this review.

This was me when this ARC hit my kindle:

Elena and Raphael are one of my spirit animal couples.
I ADORE them.
And I adore this series.

Now, I am not sure if this was just a case of my expectations being too high or what, but this thing just didn’t blow me away…and the ending straight up pissed me off.

But let’s back up.

In every one of these books, there is always (1) the grander overarching plot line and (2) a case or puzzle that must be solved within the cover of each specific book.

So here we, of course, had…(1) a case that had to be solved and (2) the overarching Cascade issue…but we also had (3) a sort of “mystery issue” that starts in the beginning…

And ends on a cliffhanger.

Now, said pique is not the sole source of me not loving this book to the fullest.

I also felt like the story moved a bit slowly and the case in this book seemed a little…less than when compared to the of other books.

And yes, okay, I was irritated that the above mentioned issue was hanging over my head for the entirety of the book.

All that said, I still enjoyed this book.
It’s VERY important that fans read this book.
SO much happens here that moves the overarching plot line forward, especially that vexing “issue” I keep diabolically mentioning without fully explaining.

I truly believe this is one of those books I will love and appreciate more upon a re-read and upon creating distance between it and my ridiculously high expectations.

I think if you go in with that in mind, this book WILL blow you away. And it will make you pine for the next installment, like me.

Until then, though, we wait.