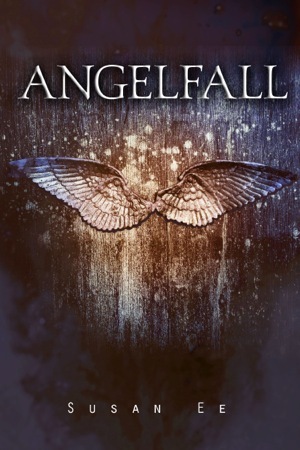 It's been six weeks since angels of the apocalypse descended to demolish the modern world. Street gangs rule the day while fear and superstition rule the night. When warrior angels fly away with a helpless little girl, her seventeen-year-old sister Penryn will do anything to get her back.

Anything, including making a deal with an enemy angel.

Raffe is a warrior who lies broken and wingless on the street. After eons of fighting his own battles, he finds himself being rescued from a desperate situation by a half-starved teenage girl.

Traveling through a dark and twisted Northern California, they have only each other to rely on for survival. Together, they journey toward the angels' stronghold in San Francisco where she'll risk everything to rescue her sister and he'll put himself at the mercy of his greatest enemies for the chance to be made whole again.

Ok, so… angels are wrecking havoc on Earth and nobody fucking knows WHY.

In fact I don’t think the angels themselves know WHY.

And then it dawns on me – they all are just hawt for some human pussy. Yep. At least that’s my conclusion so far, because as of yet a lot of details are unclear. I need the sequel now!

This was so packed with action that I couldn’t stop reading. Men with wings, crazy flesh eating things, scorpion angels (dafuq?). Pass me that WEED, this shit is great!