This just in: romance takes center stage as West End theatre's Richard Troy steps out with none other than castmate Elaine Graham

Richard Troy used to be the hottest actor in London, but the only thing firing up lately is his temper. We all love to love a bad boy, but Richard's antics have made him Enemy Number One, breaking the hearts of fans across the city.

Have the tides turned? Has English rose Lainie Graham made him into a new man?

Sources say the mismatched pair has been spotted at multiple events, arm in arm and hip to hip. From fits of jealousy to longing looks and heated whispers, onlookers are stunned by this blooming romance.

Could the rumors be right? Could this unlikely romance be the real thing? Or are these gifted stage actors playing us all? 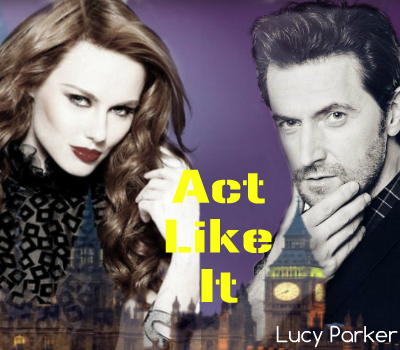 This book was like nothing I expected. It was very different from what I have read before and I’m not talking only about the premise – two stage actors who start a fake relationship and then falling in love for each other-, but also about the writing. The writing was…well different, but in a good way – and also flawless and witty. “Act Like It” is a romantic comedy that made me smile and also LOL a couple of times. It’s an enemies/friends to lovers kind of story with an interesting setting – London’s West End and two entertaining main characters you will fall in love with.

Richard Troy is an enigmatic, sexy, very talented 35 years old stage actor. He’s grumpy, arrogant, infuriating and he’s not very liked by…well, anyone. His public image is deplorable and lately it started to affect ticket sales. Needless to say the management is not pleased, so obviously something needs to be done. 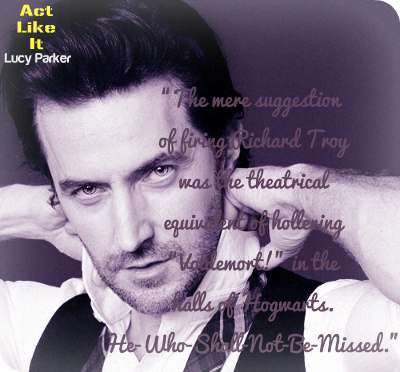 Richard needs some good publicity, so the management comes with a brilliant idea. Well not so brilliant for Lainie Graham, the sweetheart of the theatre, a stage actress who works with Richard. Apparently she’s the one who should save Richard’s image. How? To get engage in a fake relationship with the pompous a**.

“You would have to have a skin like a rhino to put up with him. Or just no self-esteem at all and a faint aura of desperation.”

It goes without saying Lainie is not very happy, but she has something to gain, something she desperately wants so she’s forced by these nasty circumstances to accept the offer. Richard and Lainie can’t tolerate each other very well…at first, but as they start to spend more and more time together they become some sort of friends realizing they are not so wrong for each other after all.

“He was no stranger to sexual frustration.
It was more than that. He was…God, he was bonding with her.

Feelings—warm, strong, nauseating feelings—were springing up all over the place, unfurling in his chest, his gut, his groin. Sinking in deep with their little hooks.”

I really enjoyed this funny, entertaining tale, but I have to admit I was a little bored in the beginning since the pace of the story (in the beginning) was a little slow for my liking. Everything got better as the story progressed and I’m glad I continued reading it since in the end I liked the storyline and also the main characters. The author used here third person point-of-view, which I have to admit I didn’t fully enjoyed. Not only because I prefer first pov, but also because I believe the story would have been more entertaining written in first person point-of-view. But this is just my opinion.

Both Richard and Lainie were entertaining characters, multi-dimensional and I liked them both. Richard was portrayed like an infuriating a**hole from the beginning, but as the story unfolded we get to see Richard can be more than that, that he is more than a stage actor. I have to be honest here, he got on my nerves a couple of times, but I can’t say I hate him or that I would have liked another man for our heroine, Lainie. No! Because he was the perfect match for her. Richard can act like a pretty big prick, but he can also be thoughtful, caring and even sweet. Who would have known? Hmm… I liked very much how he was with Lainie and I have to say what won he over was his protectiveness. What can I say?! I loved a hero who is protective with his lady. 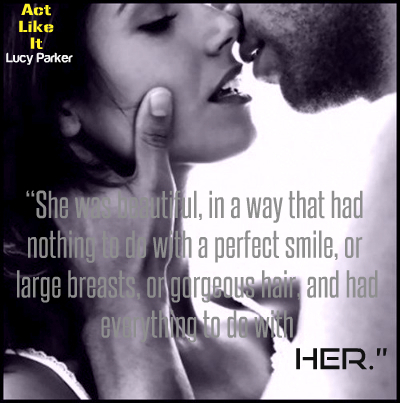 Lainie was a fantastic heroine as well. She was smart, sassy, hilarious and I liked her very much. She was a tough cookie and she knew from the start how to handle Richard. She really did a great job!

“I don’t think you’re a bad person, Richard. Perhaps a little more flawed than most,” she teased, and he grimaced, “but I shall rise above that and keep a thick skin where you’re concerned.”

The banter and later the playfulness between these two characters were really great done and the slow burn between them was lovely.

“Lainie stroked the sides of Richard’s neck, slid her fingers up to touch his earlobes. She cupped his jaw, feeling the muscles working beneath the warm skin, and attempted to angle the direction of his head. His kiss was both demanding and coaxing, playfully daring a response from her even as he took what he wanted.”

What I didn’t like too much was the abrupt ending. The story has an epilogue, yes, which I liked, but I wanted something more.

Overall, a fantastic read and a great debut! I’m looking forward to read more books from this author!