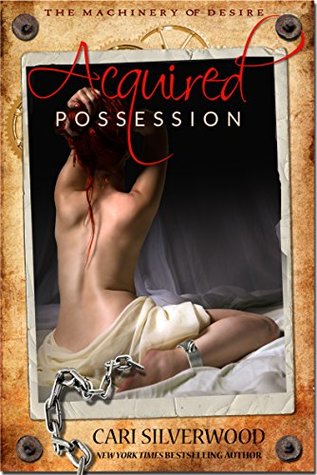 The night Emery is taken she is reading emails in bed.
Aerthe, another world, the world of the Swathe, the moving cities of the Mekkers.

Blind on arrival and naked. No one touches her until the Mekkers decide humans aren’t people, and therefore can be bought and traded. The journey through the portal alters humans, shines them all pretty. Humans glimmer.

Emery’s bright hair and nails will forever mark her as alien. Her freedom is gone. Though her sight returns, she becomes a possession of House Oren.

But someone else wants to own her. The House Master, Mako, a man who uses whips and canes like most people use a knife - daily, with efficiency and casualness.

She vows to never give in.

Banned from marrying. Banned from having playing too intimately with the house possessions, Mako holds himself back.
He mustn’t. Shouldn’t. His job is to punish, to control, to keep the House in order.

But when Emery runs and takes with her a most dangerous war machine, one not seen since the Last Days of the War… Mako is the man they turn to.

To chase her down. To bring her back, lamed, dead, or mostly alive.

Inspired by the Gor series by John Norman.

This was a cool dystopian/captivity/PNR-ish/smut-fest buffet of a book.

Since I love all of the above, I was either predisposed to like it…or predestined to be harsher critic. Either way though, they chips fell where they fell and I had fun with this one.

I think the world was interesting – although the world-building was a mite underdeveloped – and the characters were good – although they too could have been a little more fleshed out. I think I would have enjoyed this more had some of the “rules” and truths of the world been introduced a littler earlier than they were.

Regardless, I enjoyed this enough to want to pick up book two as well as check out more from this new-to-me-author.