***NOTE: This book is VERY dark. Please take that into account before reading. ***

All sins are equal in the eyes of God, but I'm not God. One sinner made me his sin, and I can't let men like him live. I want to kill them. Every. Last. One.
Ezra James is no different. I was going to kill him, but then I found myself obsessed and possessed in the most reverent of ways. I became his sinner, and he became my sin, but the wages of sin is death, so I must kill him.

The son of a whore, raised by criminals, molded to fit into a world without morals. I've never given a shit about anything until the night I watched a man drop dead at the feet of my little killer. She called to my depravity, and everything in me demanded that I take her, possess her, own her. Some monsters hide behind the faces of angels.

Through blood, absolution shall be found. 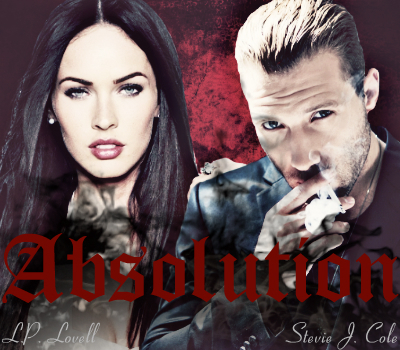 “We are imperfect, and our sins should mar our bodies as not to mar our souls.”

WTF did I just read? This book left me speechless, it left me numb and most important of all, despite the fact it was crazy as f@ck, it left me wanting more. “Absolution” was dark, raw, sadistic, violent and needless to say is not for everyone. Don’t expect hearts and flowers reading this one. This is not a love story and in my humble opinion is neither a book about love. This little dark gem will keep you at the edge of your seat, taking you slowly out of your comfort zone. Maybe you will feel uncomfortable reading this one, maybe you will be repulsed by some things going on here, but if you enjoy dark reads you should consider reading it.

“Absolution” fallows the story of Evelyn ‘Evie’ who all her life had been taught that pain brings her closer to righteousness. She learned to love the pain, because in her opinion pain is the only thing that can keep her clean.

“How can something as simple as asking for forgiveness absolve you from your sins? What penance is there if there is no pain?”

She believes pain equates to forgiveness and she believes those who do something wrong must be punished. Her absolution comes through blood. After escaping her horrible life at home, Evie and her sister come in the city not only to start a new life, but also to clean the world from sinners (all men). They kill without remorse, truly believing that way she will protect all the women who need to be saved.

When her sister is murdered Evie is willing to do anything to find her killer. She will find him and she will kill him no matter what. She finds out that her sister’s boss name is Ezra and she comes out with a plan – to find him and make him pay as well.

“There’s a market for everything, and the world is full of sick fuckers. I just happen to be a man who exploits their fucked up fantasies.”

Ezra was raised by criminals since his mother, a filthy whore died. He is a man without morals who runs a whore house and he doesn’t care about anything or anyone. After meeting Evie he figures out pretty quickly that she’s different from all his whores. He wants to own her body and soul and to make her cry and scream. 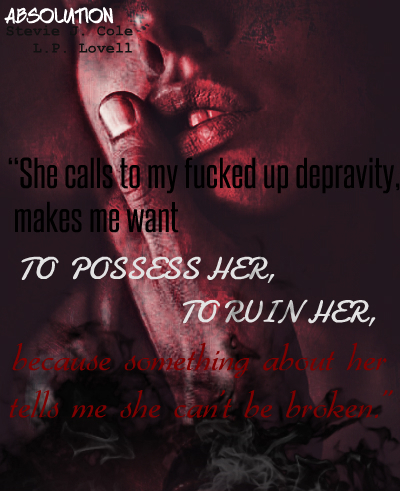 “Absolution” was addictive, really well written and it kept my interest from start to finish. It was bloody, it was psychotic and it was also erotic. Both Evie and Ezra are fascinating well developed characters. They are flawed, unredeemable and so f@cked-up. Evie was a batshit crazy heroine from the beginning. First, her believes were weird as hell. She was beyond damaged. She was cold and calculated, but also vulnerable at times. One moment she wanted to kill Ezra and the next she was infatuated with him even if she barely knew the man. I guess Ezra was both an anti-hero and a hero. An anti-hero generally speaking and a hero for Evie who saw him this way because of her past and because she believed he can give her the absolution she craves. Our main male character was intriguing, charming, but he also was dangerous and unstable to say the least. Needless to say he was the perfect match for Evie. He was really possessive at times, but he also was caring in some weird way.

“I need her. I need to possess her because, for whatever reason, she is my weakness. And weaknesses must be controlled before they consume us.”

All in all, “Absolution” was a dark and disturbing read that not only blow me away at times, but it definitely left me wanting more. Ihm…I’m not sure what does this say about me! Well…what can I say?! I loved them dark and gritty! 😉 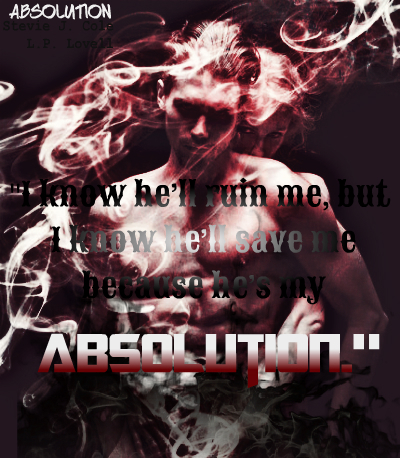