Sometimes your life is split by a single decision.

I’ve spent every day of the last seven years regretting mine: he left, and I didn’t follow. A thousand letters went unanswered, my words like petals in the wind, spinning away into nothing, taking me with them.

But now he’s back.

I barely recognize the man he’s become, but I can still see a glimmer of the boy who asked me to be his forever, the boy I walked away from when I was young and afraid.

Maybe if he’d come home under better circumstances, he could speak to me without anger in his voice. Maybe if I’d said yes all those years ago, he’d look at me without the weight of rejection in his eyes. Maybe if things were different, we would have had a chance.

One regretted decision sent him away. One painful journey bought him back to me. I only wish I could keep him.

“I could heal him, but he could ruin me. I would make that sacrifice without question, simply because he needed me, and I loved him.” 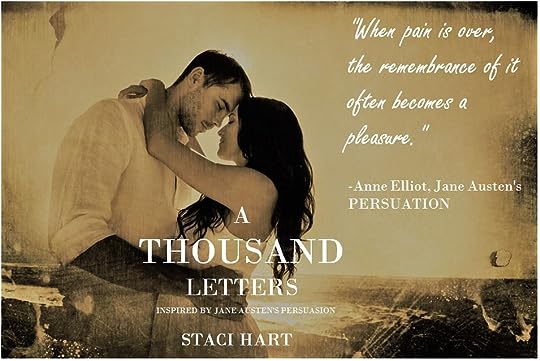 Wow! I absolutely adored this story. I savoured every beautifully written word. “A Thousand Letters” ticked all the boxes for me and this amazing story epitomises why I love romance books so much. Each and every prose was artfully crafted to produce something outstanding that touched my heart and I’m sure this story is not one I will forget anytime soon. This is a beautiful second chance romance story that will move you beyond recognition and make you question the true value of life; never taking for granted the most amazing gift of both giving and receiving love.

Elliot and Wade were high school sweethearts and even though they were young, their love for each other was powerful and intense. They had a plan: Wade was going to join the Army after graduation and Elliot was going follow him a year later. They were going to get married and live happily ever after. Nothing was going to tear them apart. Unfortunately plans don’t always work out the way you want them to. Choices were made and Wade ends up leaving, shattering both of their hearts in the process.

“While I exist in this universe, I want you tied to me in a way that’s unbreakable. Undeniable. And I know what you want – you told me last night. I know you want me, want this, just as much as I do. So just make the choice. It’s easy.”

Seven years have passed and Wade’s father (Rick) is now dying, so he returns home from his posting in Germany to be with his father. Wade has avoided returning home for long periods of time during the seven years since he left, because it’s simply too hard. Everything at home reminds him of the love he and Elliot had shared and the heartbreak he has subsequently endured. 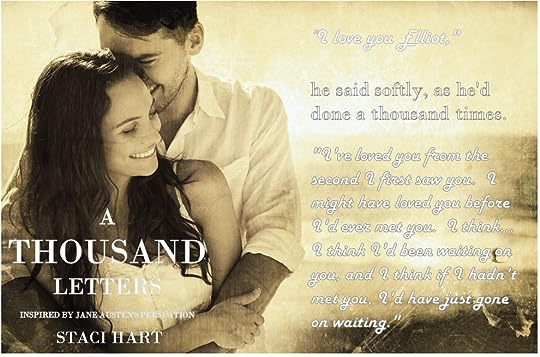 Elliot has never recovered from losing the love of her life. She filled in her time studying English Literature and received her degree. Now, Elliot is working part-time in a bookstore bar and is the carer of her sisters’ three children. Elliot also has to overcome a massive blow as her mentor, Rick, who was the man responsible for introducing her to the love of poetry and Elliot’s love for writing, is dying from terminal cancer. Rick has been like a father figure to her, considering her own father is a complete ass.

“There is no length to love; it’s infinite. It lives in you always. Hold onto it.”

Wade and Elliot were such beautiful characters who I wanted nothing but the best for them. They have been through so much during those seven years of separation, but their love for each other never diminished. They were meant to be and they had a connection to each other that was powerful and truly inspiring. They were never going to love another as much as they loved each other.

“My heart has been yours as long as it’s been beating. It’ll be yours until it beats it’s last.”

“A Thousand Letters” was an absolutely breathtaking story about holding onto your one true love and learning to forgive, even when the odds are stacked against you. This amazing story was so emotional and heartbreaking, but was so beautiful at the same time. I just could not get enough. If you love a great second chance romance story then you will definitely want to give this one a go. I highly recommend it.

‘A Thousand Letters’ was my second book by this author and while I didn’t love it as much as the first, I liked it. If you are fan of second chance romance stories, then you don’t want to miss this one. Stacy Hart’s newest release was utterly emotional, equally heartbreaking and heartwarming, full of angst and it will keep you glued to the pages from beginning until the end. Stacy’s storytelling was fantastic, addictive; her poetic, lyrical prose being so wonderfully done. If you are looking for a beautifully written story that will make you feel and make you believe in second chances and forgiveness, then you must give this one a try.

Years ago, Elliot and Wade used to mean everything to each other. They were planning a future together, but their relationship changed when Elliot refused to abandon her family, marry and leave with Wade. The last time she saw him she was seventeen, but she never stopped loving him. For two years she wrote to him, at first begging for forgiveness, later on accusing, being angry and hurt. For two years she hoped Wade will answer her, but he never did.

“Her name in my mind was a curse I couldn’t escape, a ghost that haunted me day after day, year after year since I’d seen her last so long ago.”

Seven years later, Wade comes home for the first time since he left, his family and the girl he never stopped thinking about. His father is dying and he can’t do anything about it. He’s devastated and all he wants is to enjoy some time with his father and his two younger sisters. What he doesn’t expect is to be so affected by Elliot’s presence.  The past he’s been running from (Elliot) makes him feel so angry, betrayed and filled with regrets.

“She was all I’d ever wanted, and she was here, right here. All I had to do was reach out and touch her.”

Wade’s father, who has been like a father to Elliot for years, means the world to her. She’s devastated that he’s dying and she’s devastated by Wade’s cold behavior. She doesn’t know how to deal with everything, but to be around Rick, Wade’s father, she’s willing to endure anything.

Inspired by Jane Austen’s ‘Persuasion’, ‘A Thousand Letters’ was an emotional, heartfelt story that really touched my heart. The author’s vivid storytelling made me be invested in these characters’ story from the very beginning.

While I can’t say I loved either of the two main characters, I have to admit they were pretty well-developed. Elliot, to be honest, wasn’t my kind of heroine at all. She was weak, too submissive for my liking and for a good part of the story, a doormat. I like my heroines to be strong and independent, but sadly Elliot wasn’t like that at all. Her explanation for being so weak for such a long time was simply ridiculous, in my opinion. However, she had multiple qualities I liked. She was sweet and caring towards her nephews, her best friend and Rick. I really loved her kindness and gentleness. Wade was a flawed hero I sympathized with in some way. He was annoying and infuriating for a good part of the story, so I had a hard time liking him and connect with him.

“When he reached for me, when he pulled me into his side, I melted into him. His arms wrapped around me, and I closed my eyes, sure now that it was a dream, a beautiful dream. I was whole again in his arms.”

These two characters’ relationship was complicated, to say the least, and full of angst and drama. I loved them together at some point in the story, but the miscommunication between them got on my nerves at times. Also, the romantic aspect here was not as developed as I wished it to be. I needed a few more scenes with them as a couple, in the present, but also in the past.

One of my favorite characters was Rick, Wade’s father. He was pure and simply wonderful. Sweet, caring, and kind, Rick plays an important role in Elliot and Wade’s road to happiness. I loved his wisdom, his love for his children and his love for Elliot.

All in all, ‘A Thousand Letters’ was a great, heartfelt, second chance romance. While I didn’t fully love this one, I’m sure many readers will love and will be very moved by these characters’ story.

Staci has been a lot of things up to this point in her life — a graphic designer, an entrepreneur, a seamstress, a clothing and handbag designer, a waitress. Can’t forget that. She’s also been a mom, with three little girls who are sure to grow up to break a number of hearts. She’s been a wife, though she’s certainly not the cleanest, or the best cook. She’s also super, duper fun at a party, especially if she’s been drinking whiskey.

From roots in Houston to a seven year stint in Southern California, Staci and her family ended up settling somewhere in between and equally north, in Denver. They are new enough that snow is still magical. When she’s not writing, she’s reading, sleeping, gaming, or designing graphics.