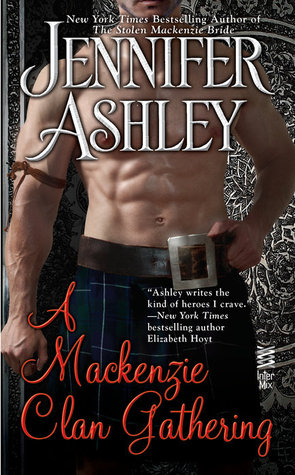 Ian Mackenzie is awakened at Kilmorgan Castle one night to find robbers stealing the priceless art collection of his oldest brother, Hart. Since Ian and Beth are the only ones in resident at Kilmorgan at the moment, Ian decides he must find the art and the culprits before the family shows up for Hart's birthday gathering. With Inspector Fellows and Beth, he investigates, though Ian is somewhat worried by Beth's late husband's brother, a retired missionary, who decides to visit. Does John Ackerley hold the "cure" to Ian's madness? And can Ian discover what has happened to Hart's treasures, and who is targeting the Mackenzies before the enemy strikes again?

Return to Kilmorgan Castle to visit the Victorian branch of the Mackenzie family, and catch up on the brothers and friends, their children, and their lives.

So fist bump to Jennifer Ashley for giving me what I love: I really enjoyed this story…

Something that annoyed me and, quite frankly, made the characters feel a little… “different” than they have from the characters I have known and loved throughout this whole series was…

Now, I know that the Mackenzie CLAN is from Scotland – DUH.

But I felt like Hart and especially Ian’s speech pattern completely changed from the other books in the series – all of which I have read MULTIPLE times.

Now this may seem…petty, I know. Now I realize that Ian would occasionally say “Aye” in The Madness of Lord Ian MacKenzie and the subsequent series books. .

But he mostly sound like this throughout the series up until this point:

“Because when I look at you, I forget everything. I lose all track of what I’m saying or doing. I can only see your eyes…You have such beautiful eyes.”

“All of us are mad in some way…I have a memory that won’t let go of details. Hart is obsessed with politics and money. Cameron is a genius with horses, and Mac paints like a god…we all have our madness. Mine is just the most obvious.”

In THIS book, however?

“What th’ devil are ye doing?” Now, I’m not saying that Ian never sounded Scottish in the other books…but not to THIS extent.

Inconsistent with the characters I know from all the previous books? Yes.

Like I said, I know it seems petty, and I understand that.

But it just made Ian seem like not quite my Ian, you know?

Another thing that irritated me? The abbreviated/fade to black sex scenes. I am used to getting some AWESOME sexy time with my Ian Mackenzie. But here? Nope. Short and fade to black and – like my good buddy Jen said – half the time they ended up on the floor…for a quickie or an “all nighter” that happened off page. And I will read ANYTHING written about him.