A Boy Like You
Like Us Duet #1
Ginger Scott
Fiction, Young Adult with Paranormal Elements, Sports Romance
March 3rd 2017

They say everyone’s a superhero to someone. I’m not sure who I’m supposed to save, but I know who saved me.

We were kids. His name was Christopher. And up until the day he pulled me from death’s grip, he was nothing more than a boy I felt sorry for. In a blink of an eye, he became the only person who made me feel safe.

And then he disappeared.

Now I’m seventeen. I’m not a kid anymore. I haven’t been for years. While death didn’t take me that day, the things that happened left me with scars—the kind that robbed me of everything I once loved and drove me into darkness. But more than anything else, that day—and every day since—has taken away my desire to dream.

I wasn’t going to have hope. I wouldn’t let myself wish. Those things—they weren’t for girls like me. That’s what I believed…until the new boy.

He’s nothing like the old boy. He’s taller and older. His hair is longer, and his body is lean—strong and ready for anything. I don’t feel sorry for him. And sometimes, I hate him. He challenges me. From the moment I first saw him standing there on the baseball field, he pushed me—his eyes constantly questioning, doubting…daring. Still, something about him—it feels…familiar.

He says his name is Wes. But I can’t help but feel like he’s someone else. Someone from my past. Someone who’s come back to save me.

This time, though, he’s too late. Josselyn Winters, the girl he once knew, is gone. I am the threat; I am my worst enemy. And he can’t save me from myself. 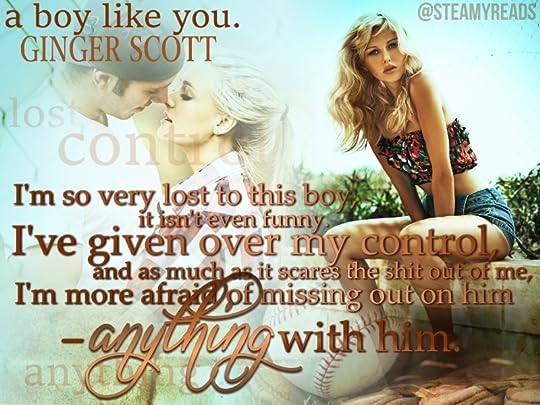 ➦I’ll be honest, I haven’t read a YA romance book in a while. Unless it’s sci-fi I usually try to stay away. ‘A Boy Like You’ had everything I love in romance books without any unnecessary fabricated drama that so often follows teenage characters. And, in all honesty, there’s just something about this book, it hypnotized me with it’s mysterious vibe and kept me glued to it.

➦This novel will take you on a journey of a girl whose problems are bigger than picking her next dress outfit for a prom. You will meet Josselyn as a little girl first and have a brief glance into her childhood along with a description of one fateful day which changed her life.

➦The first time the two main characters meet is when they are just kids. Josselyn notices Chritopher, a weird boy who nobody wants to hang out with, and she shows him kindness. And then he ends up saving her life and vanishes. Josselyn never even got to thank him.

➦And then, my favorite part – the jump to years later, when thy meet again in high school. Except Christopher doesn’t really admit to being Christopher. What’s that all about? But he’s the new baseball star at school and is being trained by Josselyn’s dad, the school baseball coach.

➦I enjoyed reading about the heroine’s internal struggles, and there were many. Starting with the strained relationship with her alcoholic father – that just broke my heart. With her mother leaving, she was basically without a supportive parent for the best part of her childhood.

➦The romantic relationship was well done and it was just that – entirely romantic. Their sweet friendship will melt your heart for sure. There were many times where I just about went “awwww” lol

➦I recommend this book to anyone who loves sweet romance stories with a bit of mystery woven in. And of course sports romances – the baseball aspect of the story is present and very enjoyable. One thing to keep in mind that there is a bit of a cliffy at the end and it appears that the author is making it into a duet. I’m one of those people who doesn’t mind cliffhangers, but if you’re one of them – just be aware.

P.S. Ginger Scott will forever be a queen of smirking characters in my book.